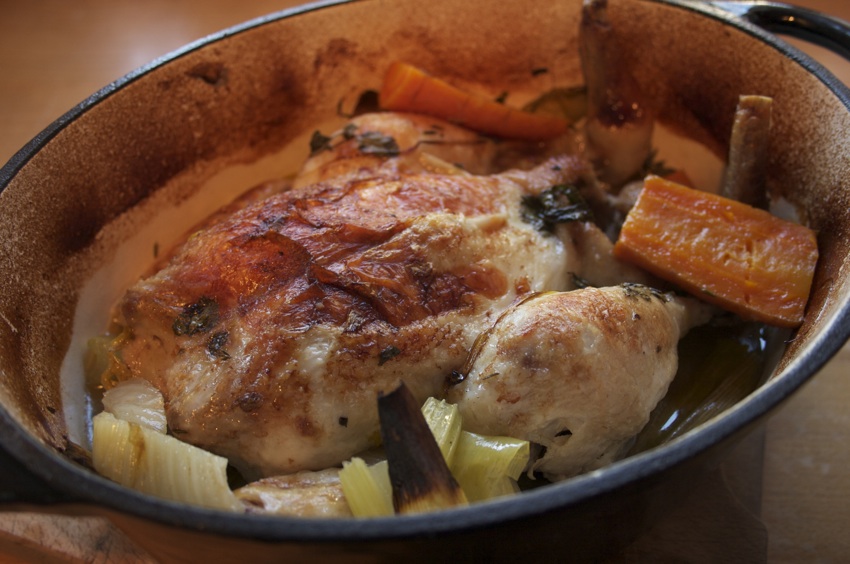 … it’s been such a glorious weekend, the sun has been golden and peachy, high in the sky all weekend… it’s been one of those weekends that, and bear with me here, if you were an alien, landing in the middle of a field in the great British countryside, you would automatically think it was the start of spring, not the start of winter… that’s if you knew what spring was, coming from Alpha Centauri, like you do and don’t actually have seasons in your part of the cosmos… oh, I think I’ve drifted slightly here…

… anyway, you get my point, it’s been lovely out… and even with the stinky cold which has continued to lurk around like an un-welcome friend who won’t go home… I’m pretty much a happy chappy…

… time for some good old fashioned cooking… and I’m thinking of a one-pot roast, inspired by Nigella’s recent TV show… I watched it, then realised that whist it’s a great recipe, it is essentially just bunging a chicken in a pot and throwing in whatever veg you have lying around… not exactly like hard work… also, if any of you have been watching the brilliant ‘Food – What goes in your basket’ program on C4, you’ll know that buying a whole chicken is so much better for the pocket!…

… I also saw this exceptional recipe on New England based fellow blogger Ocean Breezes and Country Sneezes site… she calls it ‘Boiled Dinner’ which quite frankly sounds like something you’d have removed, but it is essentially what it is… simple, good food…

… plus The Viking has indulged me and let me cook this without thinking of him, which means I don’t have to think of a veggie version and I get at least 3 meals out of this… genius!

– first you need to crack the breastbone of the chicken, this flattens the bird so you can brown it properly… Nigella goes on and on about how much she loves the sound of the bone cracking and how much she loves doing it… weirdo… but to be frank, just pretend you’re a chiropractor, place both hands over the breast bone and firmly lean on the chicken till it snaps…

– on a medium heat, add some oil to a large casserole pot and brown the chicken for 2 or 3 minutes on each side

– chuck in a glass of wine… I happened to have some sparkling rose in the fridge… and then throw in the garlic cloves.

– chuck in the rest of your veg, leave them whole, chop them up, add anything else you think may work… I had some fennel and some green beans which went in, plus the herbs and celery leaves but don’t worry if your celery didn’t come with any, it really doesn’t matter…

– into the oven, covered, on 180 for 1 hour, then remove the lid and let it brown for 30 mins… at this stage you could throw in some rice or pearl barley, or cook some separately to serve with it….