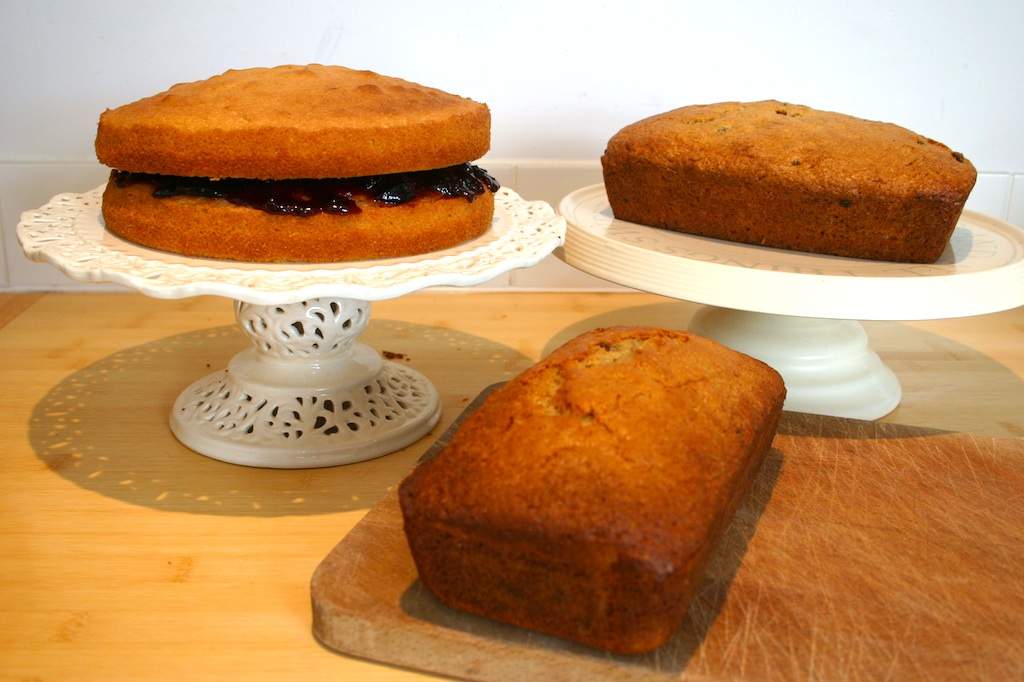 … a couple of years ago I baked some scones for Sheila’s 80th birthday… Sheila is the mum of my friend Tina and very sadly she died last week… Sheila, Tina and her family live in Aby, our nearest village and we’ve been good friends since we moved up here almost 10 years ago.  With the wonderful sense of community that you have out here in the middle of the country it is always so sad to lose anyone and it really does effect the community as a whole… i’m sure Tina won’t mind me saying that Sheila was a powerhouse of a woman… always at the centre of any village get together, usually with a whole box of outstanding cakes… a staunch member of the WI, she was the woman to judge if a Victoria Sponge was good enough… and she didn’t mince her words…

… Tina asked me to make some cakes for her funeral and of course I could hardly say no… I’ve gone for three easy, classic crowd pleasers, a Victoria Sponge of course, a Banana Loaf and i’ve also made a mixed fruit and candied peel loaf cake which contains some rather wonderful homemade apple jelly.

… these should send Sheila off in style!

a four egg victoria sponge
… the recipe for the banana loaf is my classic and can be found here… and the fruit loaf is a very simple adaptation of this recipe, using 2 tablespoons of apple jelly instead of the mashed banana… the reason the victoria sponge is a 4 egg not the traditional 3 egg is that I couldn’t find my 18in Victoria Sponge cake tins and had to use by 20 inch ones and didn’t want to stretch the mix and end up with flat cakes… I have, however, followed Sheila’s traditional method of weighing the eggs and then using the equivalent weight of flour, sugar and butter…

– cream the margarine and the sugar until light and fluffy… I did this with a wooden spoon, which took seconds… add the vanilla and beat again.