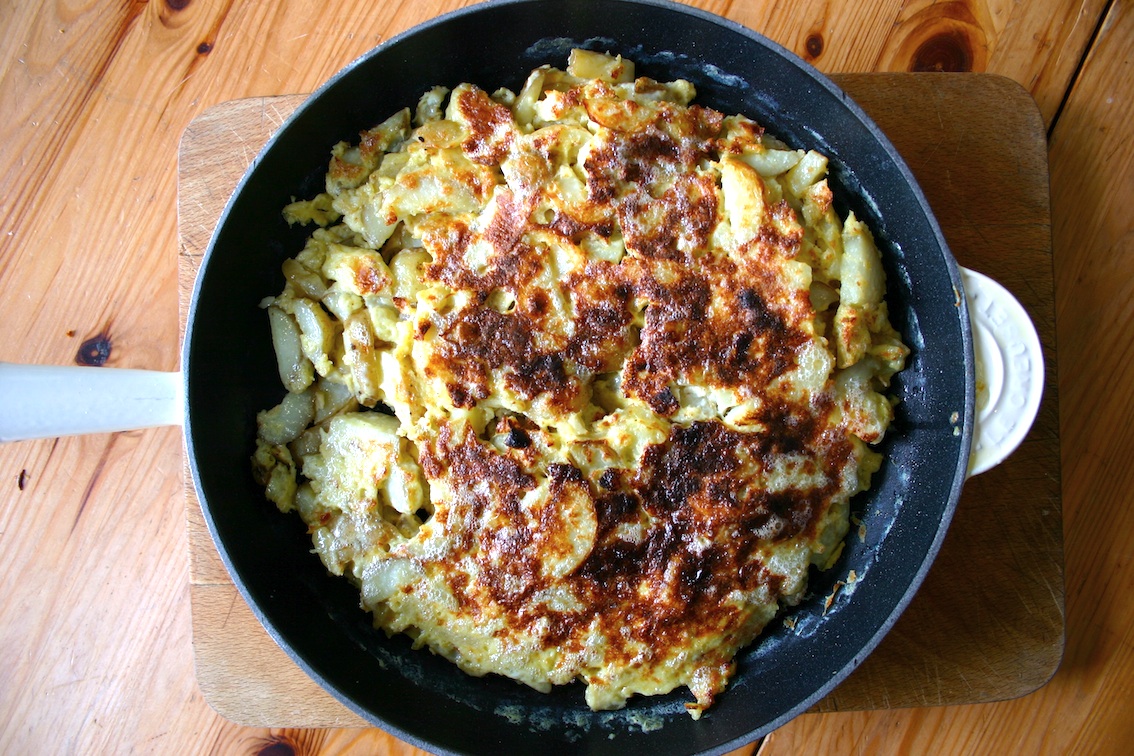 I only went and dropped the f**king plate… apparently you’re not supposed to do that!

spanish tortilla… writing those two simple, rather wonderful words fill me with fear and dread. Never before did I worry and care so much about the outcome of such a simple dish…

… as you’ll know The Viking and I have just come back from a quick break in the sun.  We often go to the island of Mallorca as, i’ve explained in previous posts, not only is it conveniently close, inexpensive and nice and sunny but because my family have had a holiday home there for nearly 30 years I feel like I know it well enough to arrive and be on holiday immediately… which I think you’ll agree is quite an important part of taking a break… we don’t have to find the local panaderia or that delightful place to eat… we can quite literally kick of our shoes and relax… the only problem with this is that I feel we’ve become a little complacent and have stopped discovering… which I also think is one of the wonderful things about travelling… I love the idea of discovering something exciting and new about a place I think I know…

… last week my cousin had first dabs at the holiday home which left us to discover a charming small hotel nestled into the steep cliffs of a quiet seaside town… it was rustic and home-spun but so delightful we’re already planning our next visit… I also discovered the joy and now horrors of the spanish tortilla, in a quaint little restaurant slightly down the hill from the hotel…

… don’t get me wrong, it wasn’t the tortilla itself that was the issue… that was, in fact, divine… it was the decision i’ve taken to make my own version and write about here… never before in my trawl through cookbooks and the internet have I come across such vitriolic, venomous, rudely-patriotic and quite frankly stubborn collection and varied descriptions of how to make such a simple simple dish which in essence is an egg and potato pie cooked in a pan!… and I thought the Jews were a proud race… 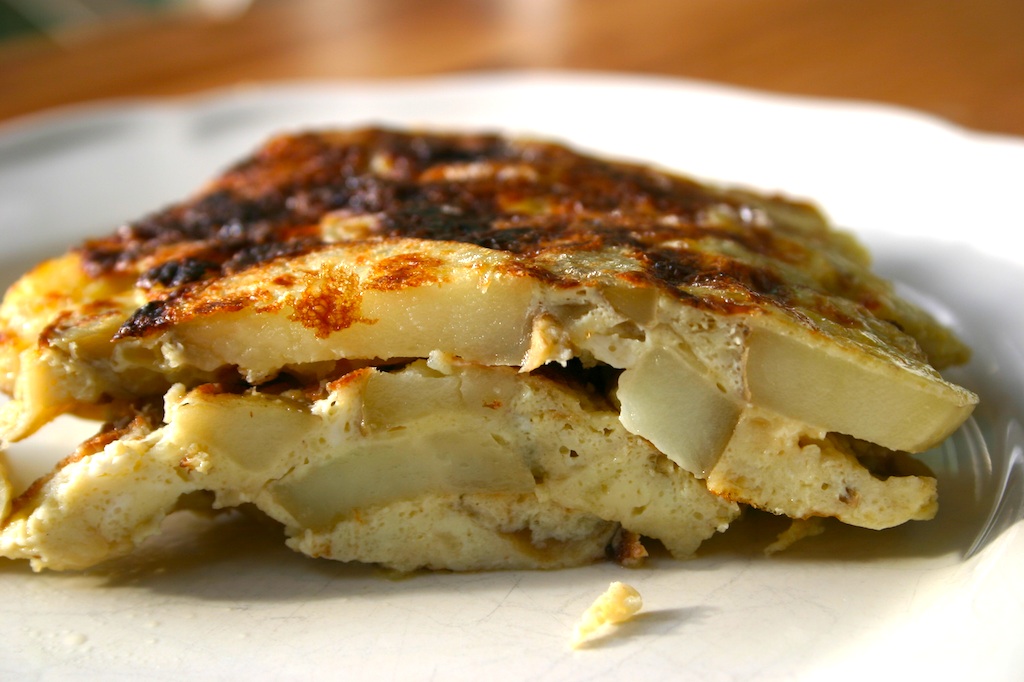 spanish tortilla
it does seem there are a billion ways that ‘traditional’ Spaniards prepare and cook their tortilla… slice the potatoes… dice the potatoes… slice the onions… chop the onions… don’t even add onions… deep fry the potato… don’t add herbs… add peppers… and it seems every abuela from every village, right across the Spanish Plain has their own little twist and addition… this is mine…

you will need a large, non-stick frying pan – i used my 10 inch le crueset pan

– im not peeling my potatoes but most recipes say you should, then cut lengthways, then slice into one pound coin thick slices

– quarter the onion then slice to a similar thickness

– put the onions and potatoes into a bowl, season, then mix them up

– place a very large amount of olive oil into your pan and heat gently then add the onion and potato mix to the pan – the oil should almost cover the mixture – turn the heat down and let it cook gently for 20-30 minutes, you want the potatoes to be fall-apart-soft and not too brown at all

– in a large bowl, mix the eggs then tip the potato and onion mix into the eggs… at this point you can either leave the potato in this mix for a while before cooking so that the onions permeate into the eggs or you can cook directly

– re heat the pan, add a little oil this time and pout the mixture in

– cook gently and slowly, checking with a spatula how the underside is browning – you’re looking for a gentle golden colour – the top probably won’t be cooked and still a little runny – this is ok

– once browned, take the pan to the sink, place a large plate over the top and quickly flip the pan transferring the tortilla to the plate….then drop the plate… no… don’t… place the pan back on the heat and slide the tortilla back into the warm pan and gently cook again for a further 5 minutes or so until the underside has turned golden… check it though as you don’t wont the tortilla to be too dry

and that my dear friends is that… and the thing is, you may be thinking ‘is that it..? all that fuss of an omelet…’ but let me tell you… this is a heavenly thing… and try really hard not to drop the fucking plate!

… the tortilla is delightful hot, warm or at room temperature… but never refrigerated… or so i’m told