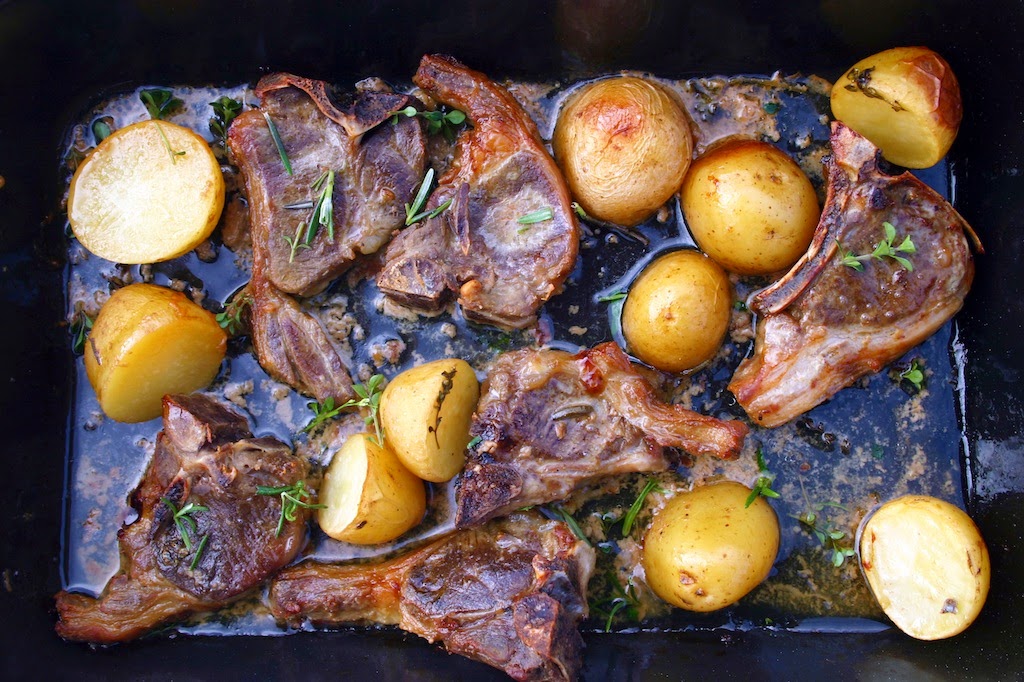 … one of the things about living with a vegetarian is that I tend not to experiment too much with meat.  You’d have to have been living under a rock these past five years to not know that there’s been a popular rise in meat… of course meat has always been popular but recently the meat movement has grown exponentially with the humble burger now reaching cult status globally it seems that every kind of meat, from pulled pork to ox cheeks, we’re all eating all kinds of meat… I caught up with dear friends Rachel and Laurence last week and they were enthusing about cooking different kinds of dishes and experimenting together and it made me think that The Viking and I simply don’t do this and because meat is relatively expensive I tend not to experiment on stuff when i’m only cooking for myself…

sous vide lamb chops with lemon and garlic mustard and honey cider vinegar
i’m taking part in the Maille Culinary Challenge, using ingredients from their new on-line boutique… I chose the mustard with garlic and citron along with the cider vinegar with honey and I think both will beautifully compliment the lamb… i’ve also reluctantly taken the sous vide out of the back of the cupboard.  I suppose i give the beast a bit of a bum rap and should treat it with more love as it does produce some incredibly tender meat…

place all the condiments, fresh herbs and salt and pepper into the bowl and throw in the potatoes, stir them around with your hands and then place them into one of the vacuum bags, flatten them out and use the vacuum sealer to vacuum and seal the bag

then throw the lamb into the bowl with what’s left of the marinade and mix them around and again, place them into one of the vacuum bags, flatten them out and use the vacuum sealer to vacuum and seal the bag

once the lamb is ready, take it out and place it into a baking tray with the potatoes and roast for 15 mins or until they’re both beautifully crisp and golden

if you’re using a traditional oven I would suggest you can achieve similar results doing a long slow roast at 100C, ensuring you cover the lamb and potatoes tightly in foil, then turn the oven up to 200C and take the foil off for the last 30 mins