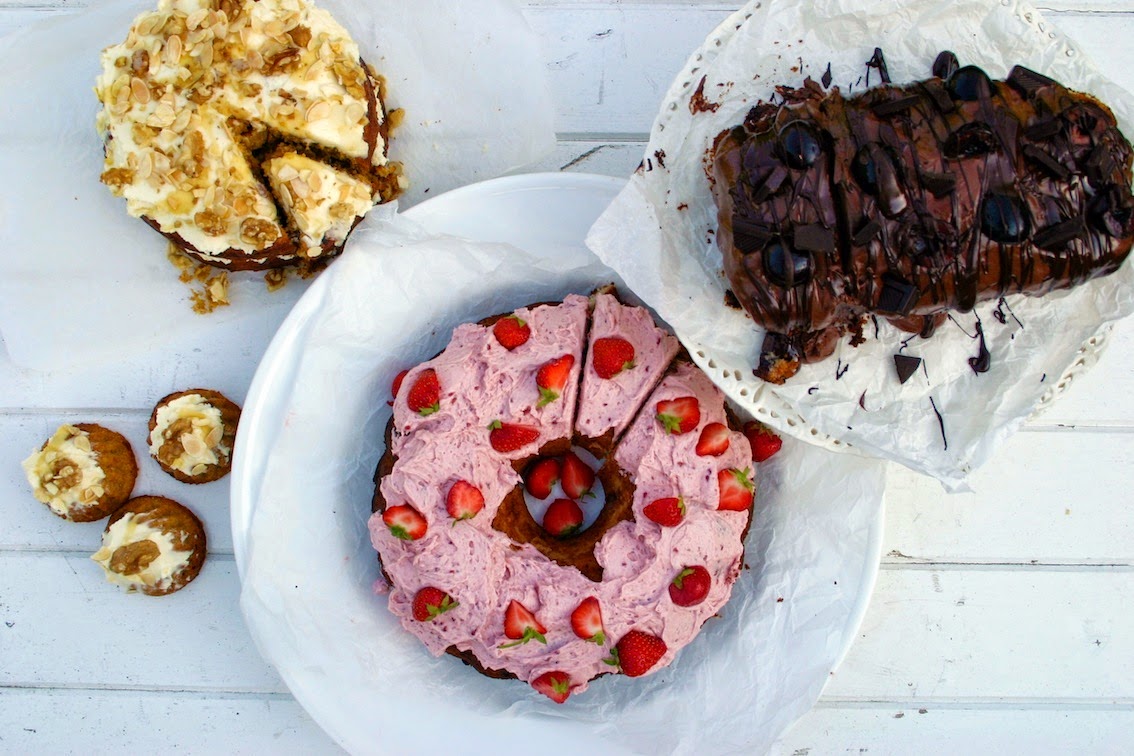 … with all the dreadful mess that the world is in at the moment it seems easy to forget that very sadly, we’ve been here before… 2014 marks the 100th year since the start of the First World War.  This was the war that shaped the 20th Century and whilst there are none alive today that were in the war itself there are still those of us with parents or grandparents who were directly effected by the terrors of the conflict.  I consider myself a pacifist and a humanitarian but of course it’s precisely because of our lack of humanity that war happens, which is why we must never forget our terrible past, nor the fallen heroes who gave their lives for our freedoms…

… yesterday in our beautiful village church we held a small exhibition in tribute to the men from Aby and Belleau who were sent to France to fight in the war.  It was a rather beautiful and very poignant day and I was asked to bake some cakes for the event to raise money for the local parish.  I wanted to bake cakes that had a very British and traditional feel to them without being stuffy or too old-fashioned and a trip to the local market which was full to bursting with locally grown summer fruits and berries was the inspiration behind the ingredients in these three beauties… 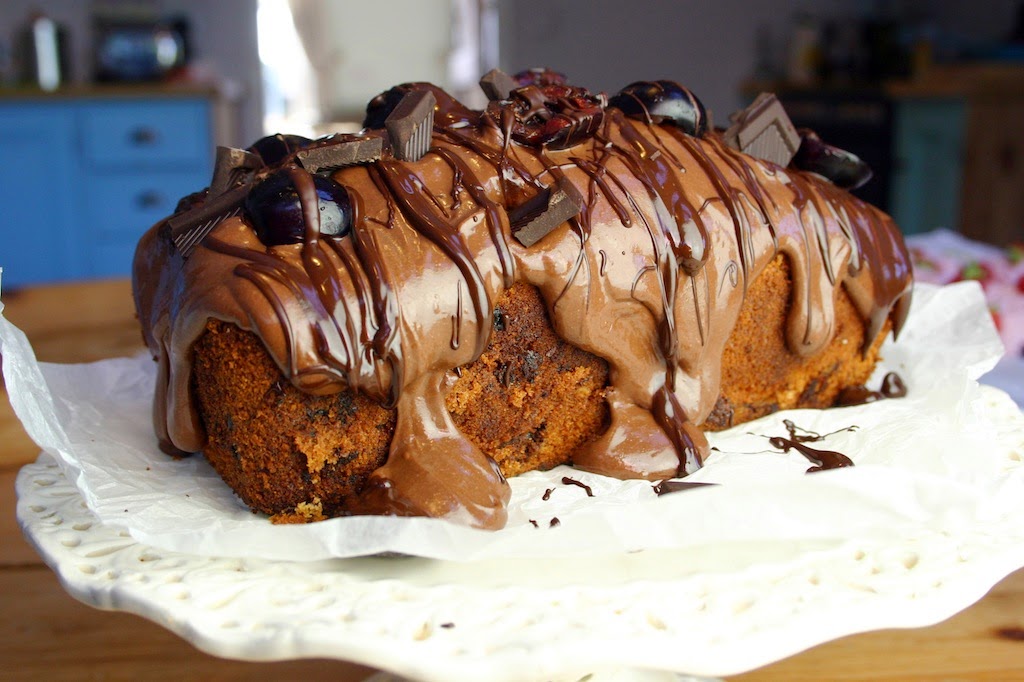 black cherry and chocolate cake with a whipped chocolate ganache
i’m sure all my British friends will agree that 2014 has been a very good year for local cherries… the rain and then all the sunshine has given us a bumper crop and so this cake is packed to the top with both fresh and preserved cherries… it’s one of those old-fashion ‘all-in-one’ cakes and it works phenomenally well plus the ground almonds really bring out that special cherry taste.
for the cake
250g self raising flour
100g ground almonds
240g butter
240g sugar
4 eggs
2 tablespoons hot water
2 dessert spoons (4oz) black cherry jam
10 – 15 black cherries – halved and stoned
for the chocolate ganache icing
150g dark chocolate – I used Green & Blacks Organic
300ml double cream
extra chocolate for melting and decorating 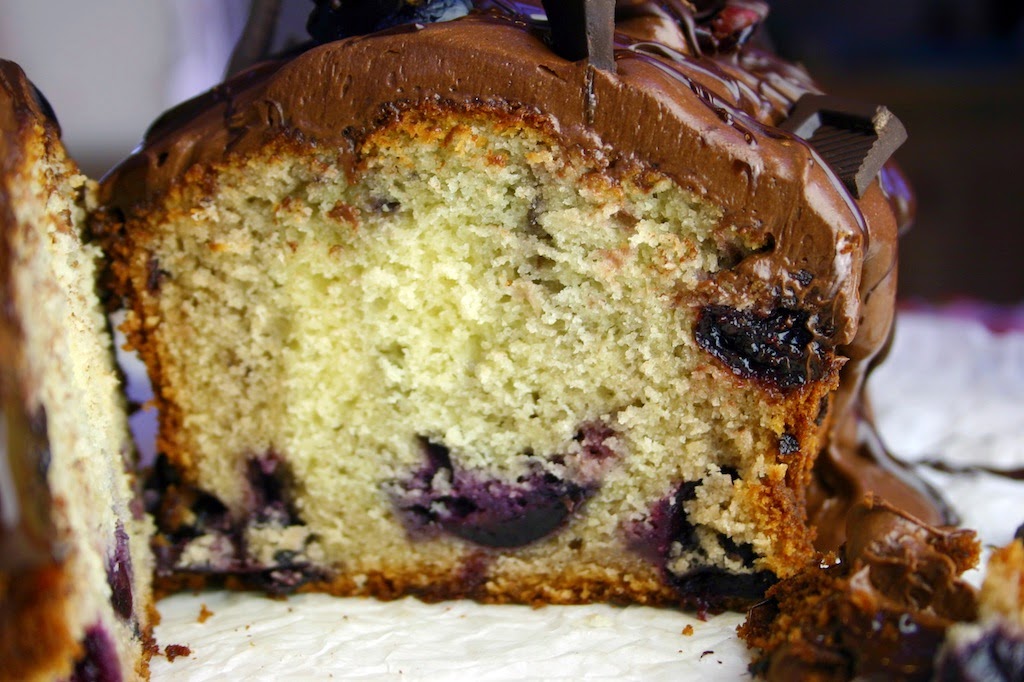 for the cake batter I simply threw everything into a bowl and whisked it up with my hand held blender whisk thingy, then poured it into two medium loaf tins that I had greased and lined with parchment.
bake for 45 minutes on 170c but watch it after 40 mins as it will turn golden quickly – set aside to cool

to make the ganache, break the chocolate up into a large bowl.   Heat the cream in a large pan until nearly boiling and then pour it over the chocolate and gently stir until the chocolate has completely melted and mixed together – then whisk frantically until the cream begins to thicken (it will never clot as theres too much chocolate in it) at which point you should pop it in the fridge for about 30 mins until it reaches a thickened state 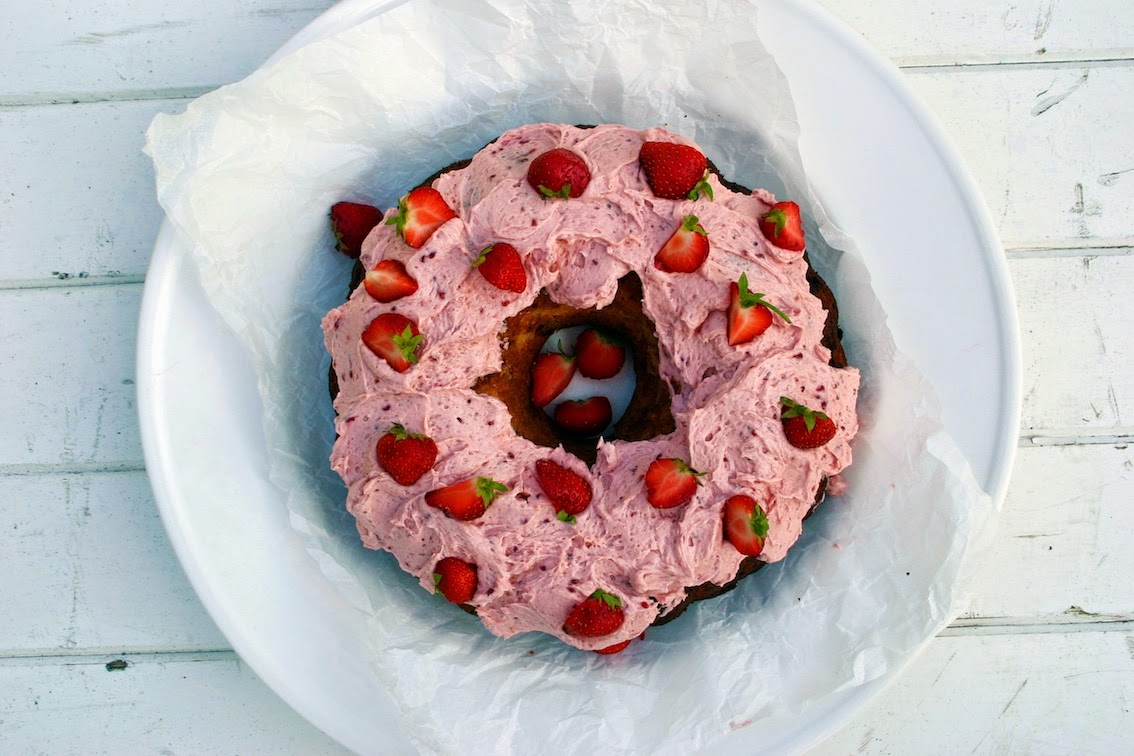 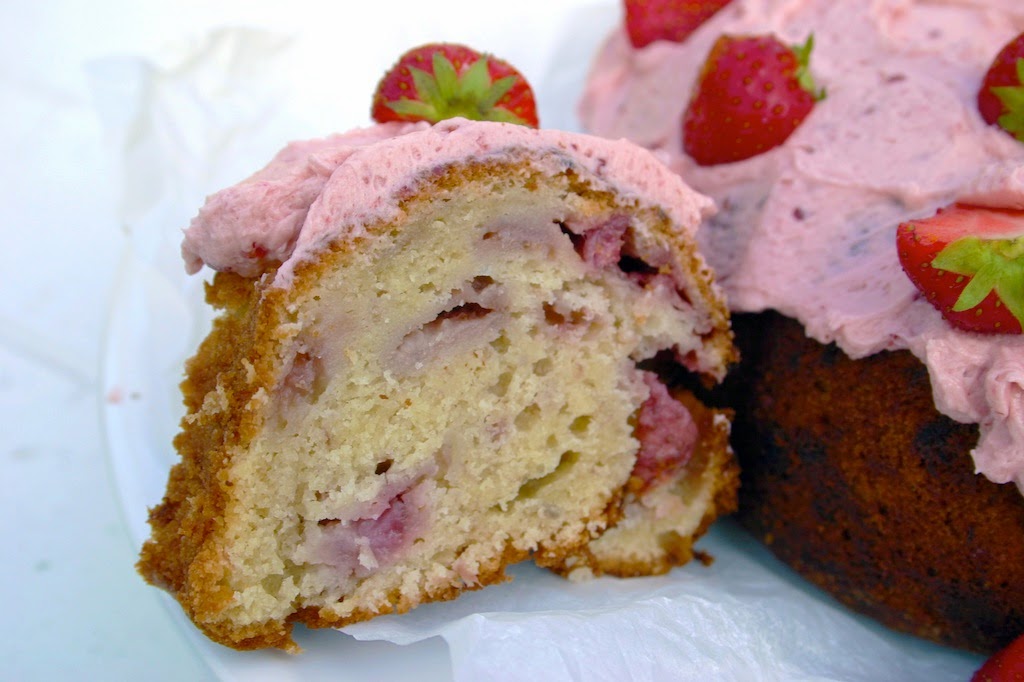 in a large bowl beat the sugar and butter until very pale and fluffy then add 2 of the eggs and beat in until blended well, then add half the flour and beat in again.

scrape down the sides of the bowl, add the vanilla the other two eggs and beat until smooth, then add the remainder of the flour and beat until no flour is left showing

add the jam, the bananas and the strawberries and fold in with a metal spoon

pour the cake batter into the bundt and bake for 30 – 40mins until golden, remove from the oven and cool in the tin for 15 mins before turning out but leave the tin on the turned-over cake till cool

to make the icing simply beat the sugar into the butter until light and fluffy, then beat in the jam 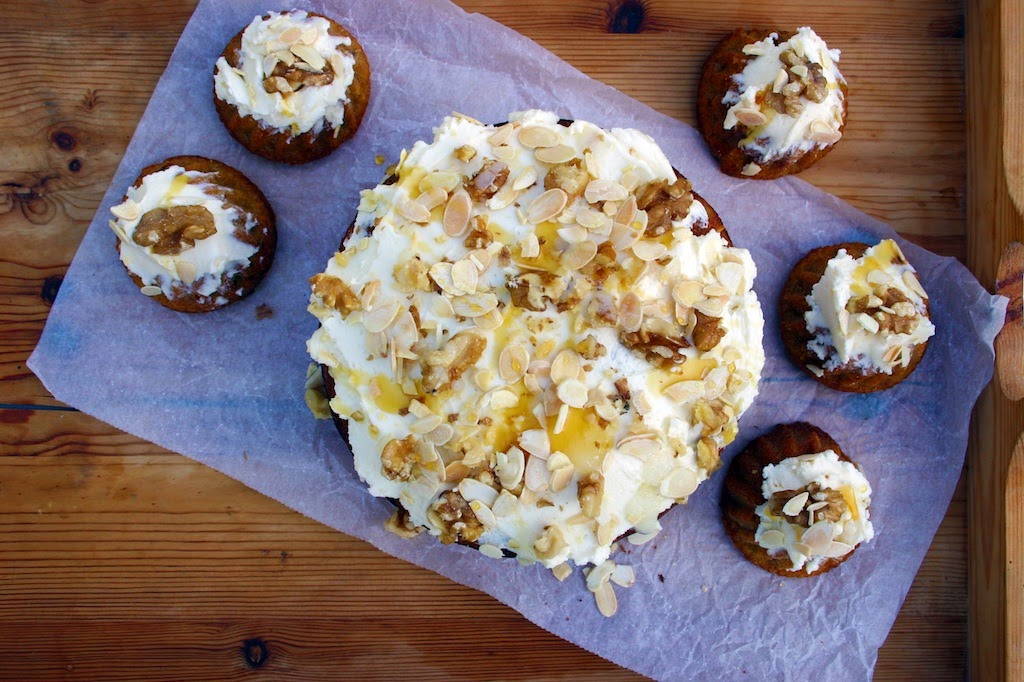 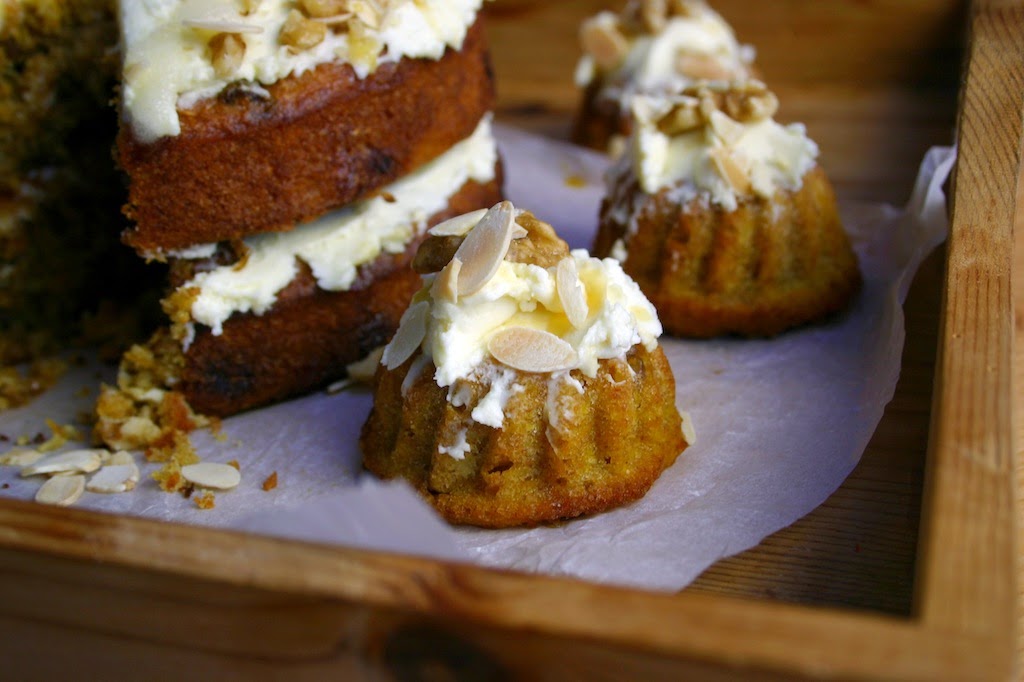 pre-heat the oven to 150C and lightly spray your cake tin
sift the flour, spices and if using baking powder and bicarb together into a large bowl
stir in the sugar and mix together well
lightly whisk the eggs and the oil and then pour this into the flour/sugar mix and stir well together
add the carrots, coconut and oats and stir in well
pour into the cake tin and bake for 1 hour or until light and spongy and a skewer inserted into the cake comes out clean
remove from the oven and allow to cool in the tin for 5 mins before turning out onto a wire rack to cool completely
to make the icing, combine all the ingredients into a smooth paste, and go wild with decorating

indulge and of course, enjoy!