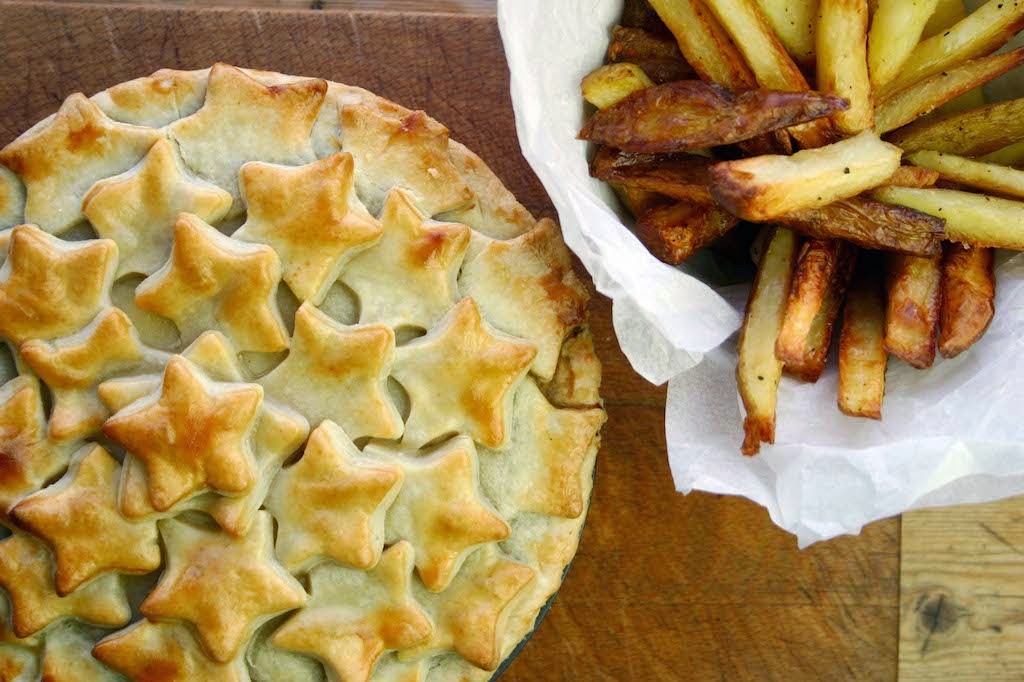 … last weekend I had a funny couple of days developing Christmas recipes.  As always, my lovely editor from Lincolnshire Life Magazine allowed me to explore something a bit fun at this time of year but my deadline was last week – which is actually really late for many publications so I should count myself lucky I’m not baking festive treats in the middle of the summer – and so on Saturday and Sunday the house was filled with the aroma of three types of Christmas stuffing and oh how intoxicating the aroma of bacon, onions, sage and apples baking in the oven is… the recipes come out in the magazine later in the month and I will of course share them with you closer to the big event but all that cooking got me in the mood and had me thinking about that special something vegetarian for Christmas Day… a nice deep-filled pie with some thick and luscious all-butter pastry, some classic ingredients and plenty enough for seconds and left-overs… 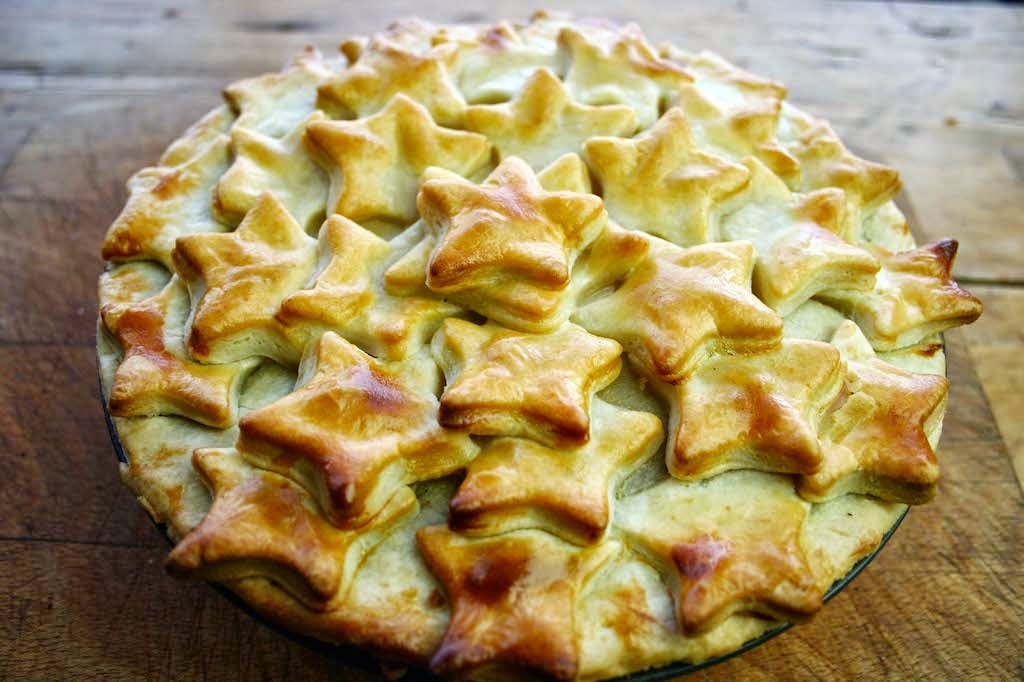 and if Christmas baking wasn’t enough our work at The Persuaders saw us in the Blue Water Shopping Centre working for Duracell and Barnardos on a really cute festive event with the Duracell Bunny and an interactive ‘green-screen’ sleigh-ride! You can check-out the fun videos we made on youtube and if anyone’s in that area we’re there until Sunday… I spent much of last night decorating Christmas trees and scattering fake snow and now I feel thoroughly Christmassy almost to the point of feeling like I don’t need Christmas any more… but you know me, i’m bound to come around again eventually!

and on a final note, apologies for no internal pie shots… I have no idea what happened.  One moment it was out of the oven and the next moment it was gone! 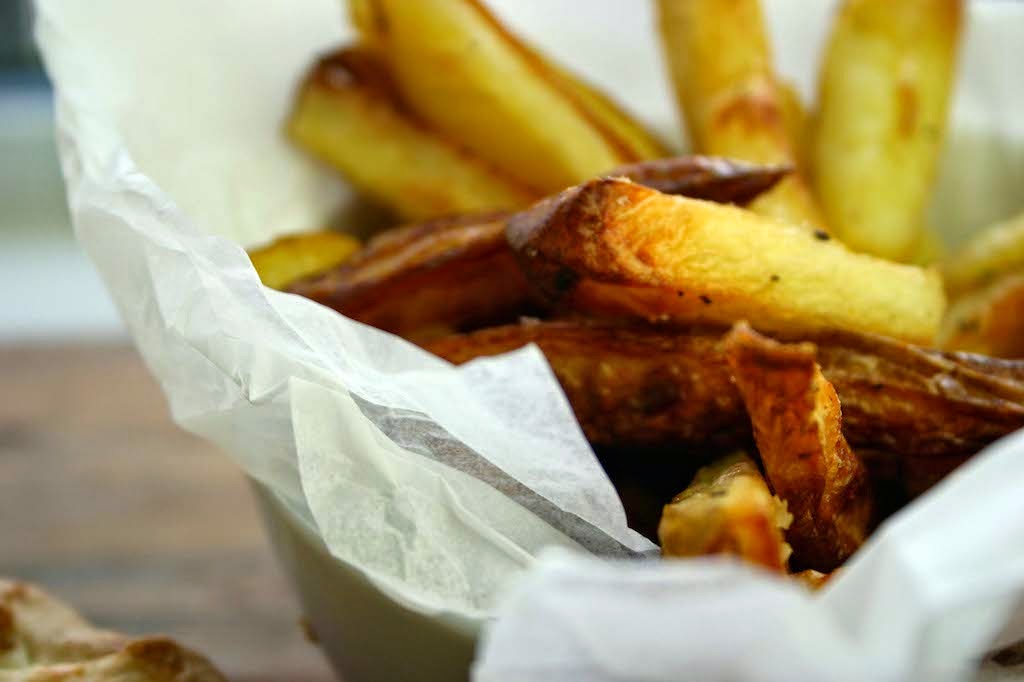 chestnut, mushroom and ale pie with homemade oven chips
of course we couldn’t have pie without chips… for some reason I had an overwhelming urge for some crispy oven chips, it was as though I was craving carbs and salt and the only way to satisfy this itch was to bake some chips… I like using big fat baking potatoes for my oven chips as you can get them nice and thick-cut and they hold their shape in the oven… plus the little round ends become so gloriously crispy it’s hard not to resist!

you will need a metal pie dish 25cm round and roughly 5cm deep – butter it liberally.

start with the pastry… I used my classic shortcrust pastry which i’ve used before in many a quiche but added a little egg… place the flour and butter in a large bowl and crumble together into breadcrumbs, then add the egg and a tablespoon of water and bring it together with a knife, it should start to form a dough at which point use your hands to bring it into a ball, add a little more water if you feel it’s a little dry.  Wrap in cling film and place in the fridge for at least an hour.

make the pie filling in a deep heavy bottomed pan by gently sautéing the onions in a little olive oil and butter until they are soft and have a little bit of colour, then add the mushrooms and thyme and sauté for a further 8 minutes… add plenty of pepper, stir and add the quorn mince and chestnuts and let it cook off for another few minutes

make the stock and take out a cupful then add the stock to the filling in the pan, turn down the heat and let it gently bubble away for 15 minutes

cut the potatoes into thick chips… I never peel my potatoes but feel free to do as you wish.  Par boil the potatoes for 4 mins just to soften them a teeny pit then lay them out on a baking sheet.  Season with plenty of salt and pepper and sprinkle with fresh rosemary, then drizzle with plenty of olive oil or use one of those clever oil sprays which makes the chips cook more easily

you should have enough pastry to roll out a lining for your pie dish and a lid with trimmings left for the layered star effect.  my pastry recipe is very short so be gentle with it and use plenty of flour… start by halving the pastry and rolling out the base which you line the pie tin with, then pour in the filling.  Roll out the lid and lay this on top, sealing the edges as you trim

so make the layered star effect you will need a star-shaped cutter… brush the pastry lid with a mixture of beaten egg and milk then started by placing the stars around the edge of the pie, letting them hang over slightly, then brush these stars before adding another ring of stars slightly overlapping the first.  Continue this way until you reach the middle… don’t worry about it looking too neat, I always think a little lopsided pastry work looks more ‘artisan’ 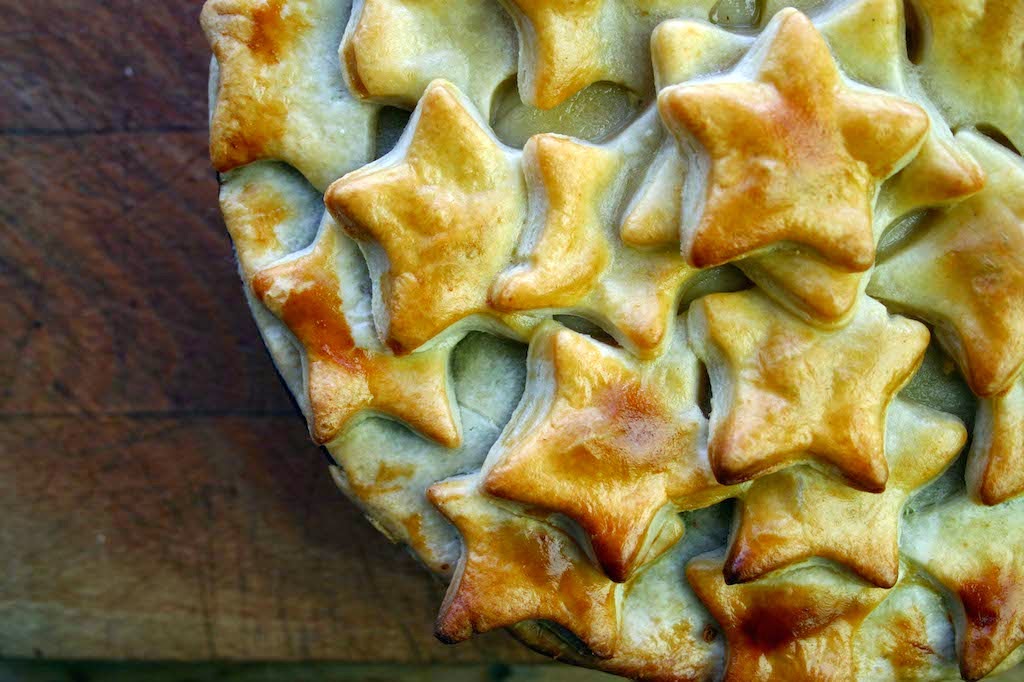 eats and of course, enjoy!