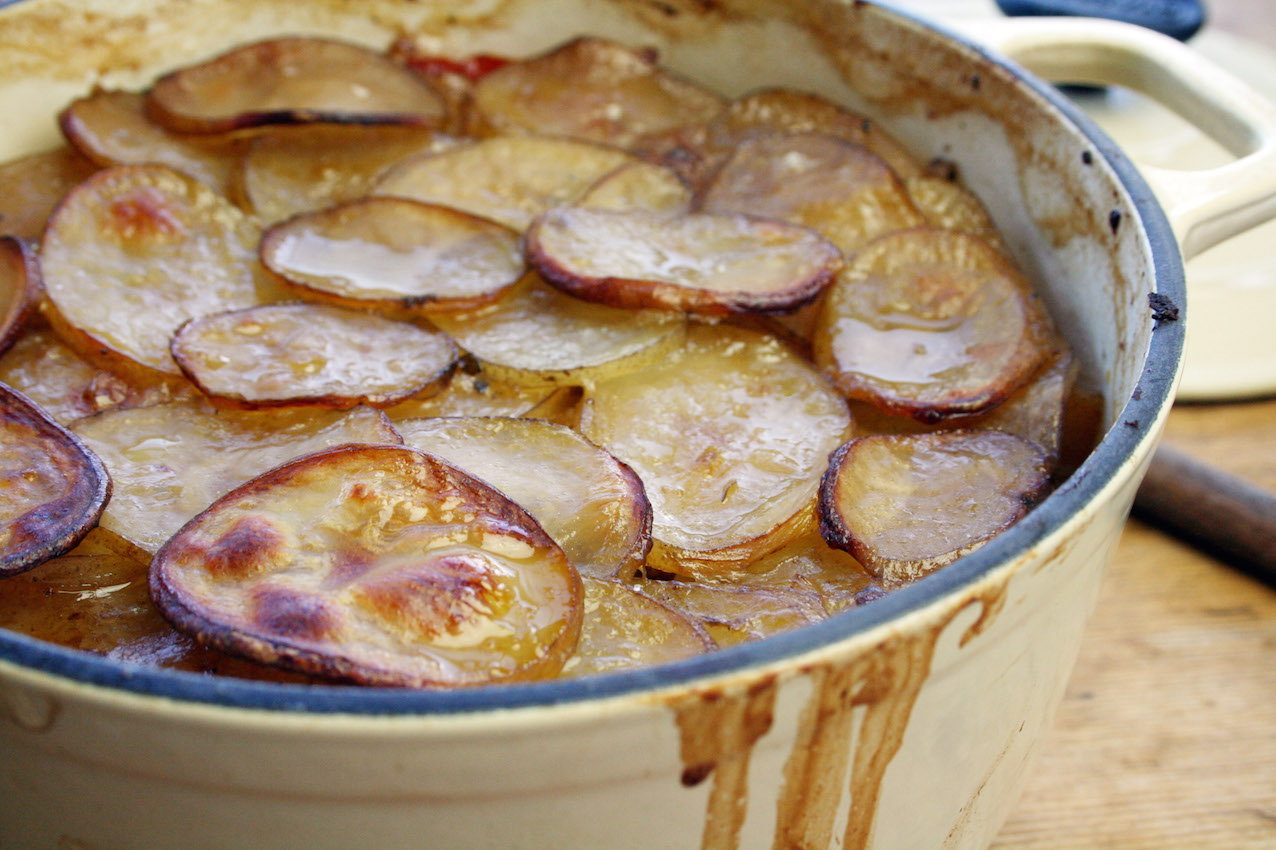 … as i’ve mentioned on many occasions, I am lucky enough to be surrounded by some wonderful  local food producers.  From the Belleau Smokery to the Lincolnshire Poacher Cheese we have a veritable supermarket of choice on our doorstep.  Yes, you have to make the extra effort but in actual fact all of them have an on-line resource of some kind so you don’t actually have to leave your home and travel in said surrounding countryside.  Whilst all sounds thoroughly bucolic it’s not quite as though i’m walking around with a woven flax basket over my arm, plucking fruit from the hedgerows and scrabbling around in the hay for warm duck-eggs… well it is a little like that because on my birthday last week I got a knock on the cottage door and standing there were Jo and Fred from Claythorpe Livestock with an armful of pork belly.  Claythorpe Livestock is a family-run business based at the foot of the Lincolnshire Wolds breeding, rearing and selling quality lamb, pork and sausages.  The sheep are out in the field opposite me now and as you can imagine it feels something of a privilege to know exactly where my meat is coming from.  They deliver locally – albeit not usually on your birthday – and will butcher to order which, to any vegetarians out there may sound like a heinous crime but is actually a brilliantly esoteric system. Anyway, I guess the point of all this is that the meat tastes glorious, is exceptional value for money and I encourage all of you, even the city dwellers, to find your local producers and researching their ordering and delivery methods,you never know who may knock on the door with pork in their hands… 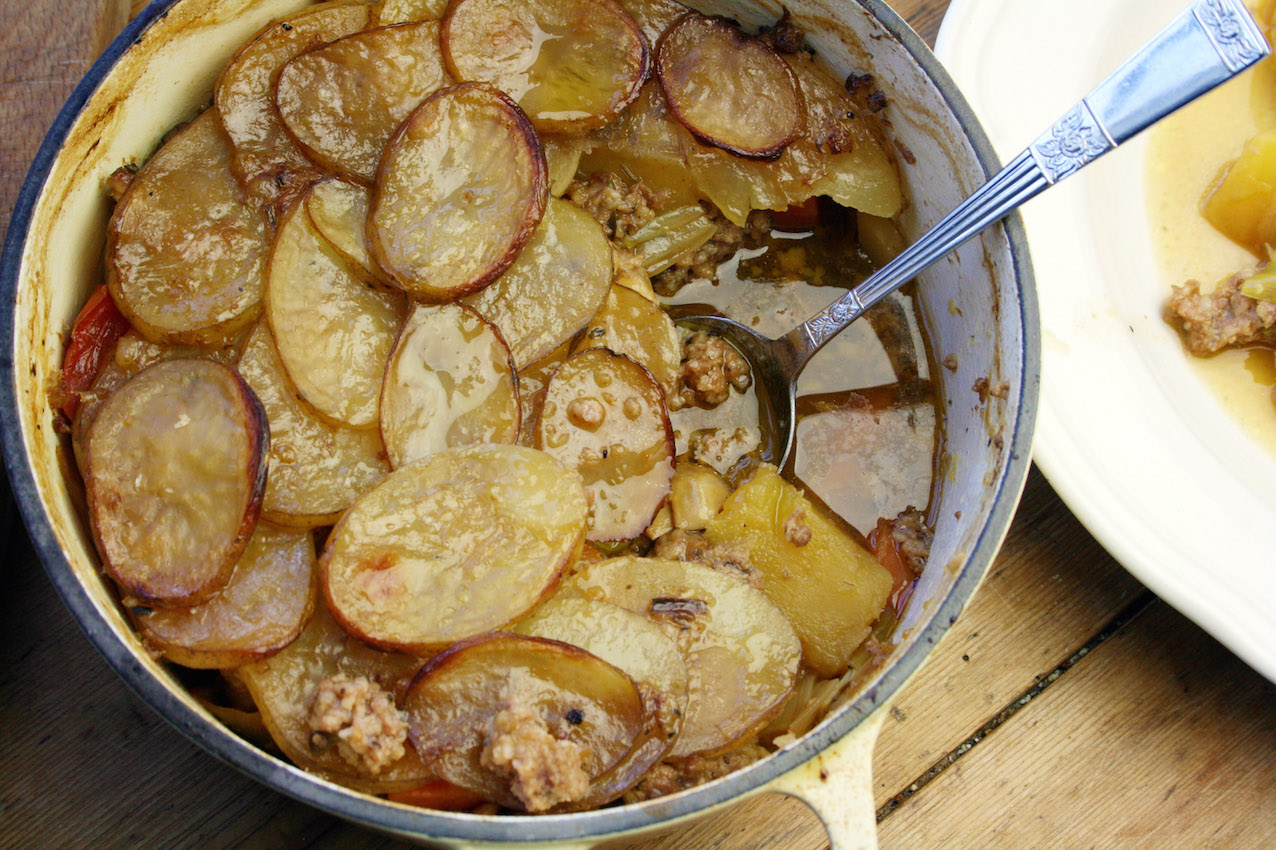 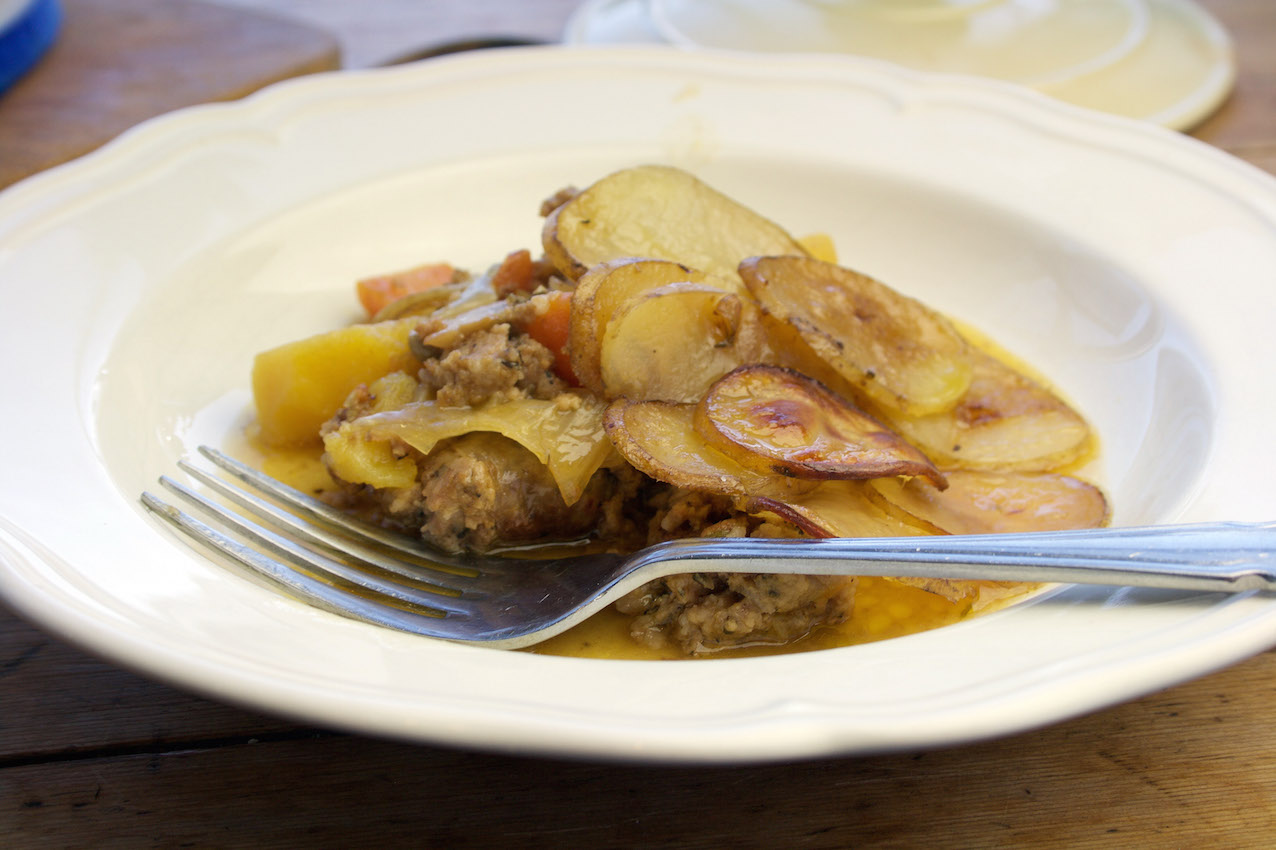 lincolnshire sausage and pumpkin hot pot
the lovely people from Waitrose are launching a campaign celebrating Autumn and everything we love about this season, particularly those warming hearty dishes such as soups and stews.  The campaign is titled #AutumnWarmers and throughout October they are going to be hosting a number of competitions around some of the season’s favourites, the Sunday Roast, Comfort Food, Autumn Baking and Halloween and will be rewarding their social communities with prizes for sharing pictures and recipes of #AutumnWarmers… it’s a fun little campaign and seeing that I adore this season, i’m all aboard…

this recipe was enough to fill my mini casserole dish and also give me enough veg to make another vegetarian version for The Viking… if you’re making one dish, simply up the sausage quota to roughly 2 per person.  As well as my locally reared and butchered sausages all my veg are from Lincolnshire which I purchased in Waitrose

heat some olive oil and a little butter in the pan and throw in the onion and celery and let them sweat and caramelise for about 5 minutes, then throw in the leeks, a little more butter and some freshly torn rosemary and thyme… place the lid on and let the veg sweat for another 5 mins until nice and soft

then return the pan to the heat, add some more oil and the pumpkin and carrots, letting them caramelise and soften in the same way, then divide these evenly into the two casserole dishes

next brown the sausages – start with the veggie ones first of course, which can then be stirred into the veggie casserole dish and then brown off the pork sausages in the same pan and add these to the other casserole and stir in

make up your vegetable stock, add the gravy powder and the wine and stir together then pour this evenly into both casserole dishes

lay the sliced potatoes on top of each dish then cover them both and cook in the oven for 40 mins, then remove the lids, drizzle over a little olive oil, turn the heat up to 180C  and roast for a further 20 mins until the potatoes are golden brown 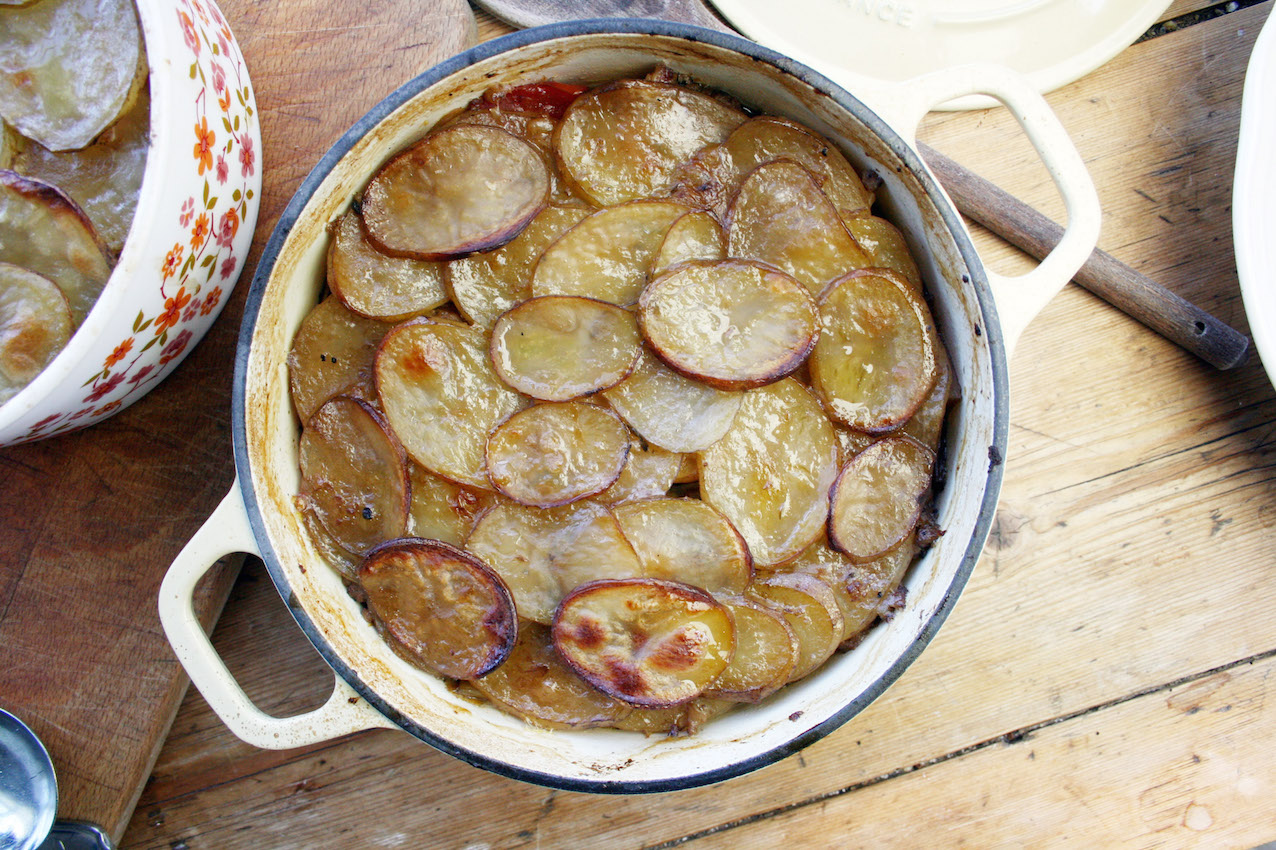