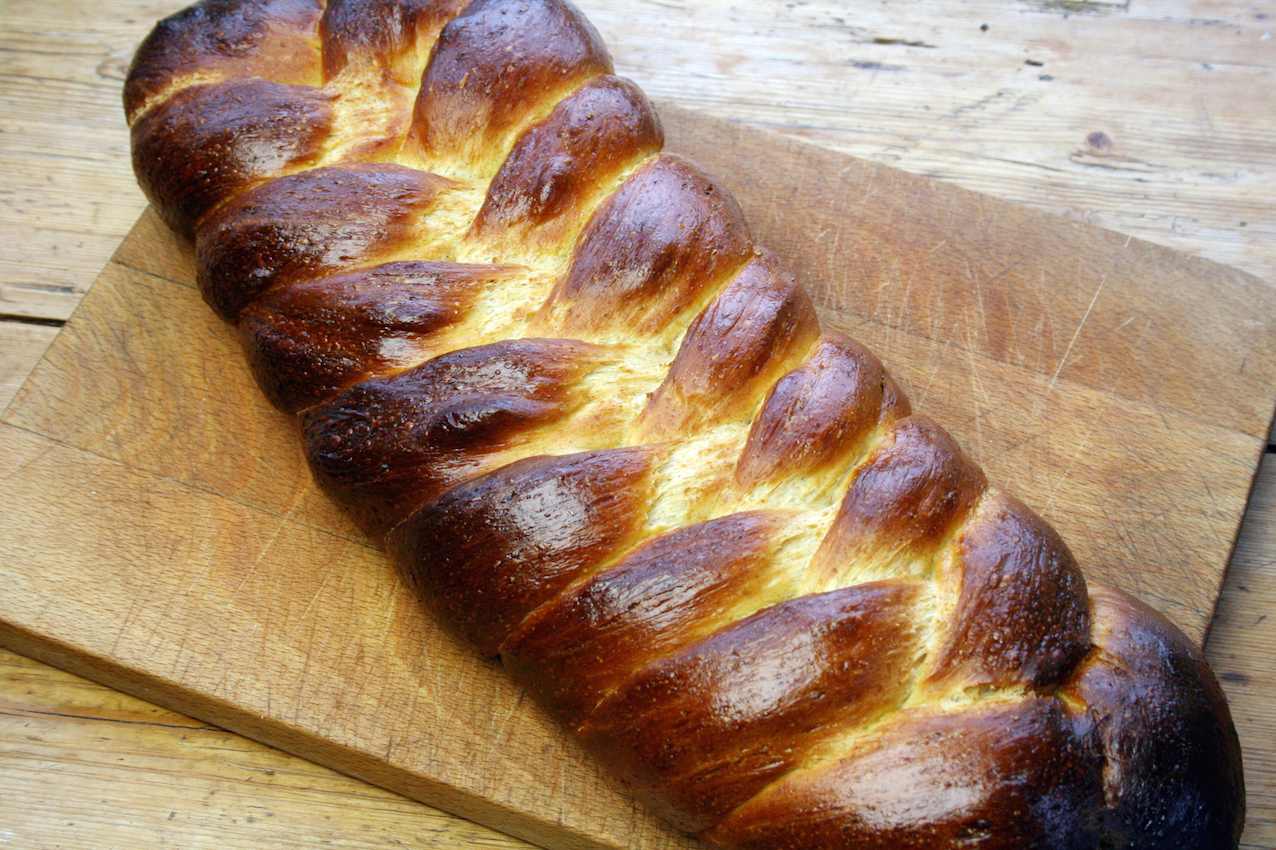 … they say that to bake a successful loaf you need to be in a good mood or your negativity will be transmitted into the dough… i’ve not experienced this myself but I do know that I was in a foul mood this weekend when I baked this particular loaf and i’m very pleased with the results so i’m not entirely sure I agree.  Perhaps it was my aggression that I took out on the dough that made it rise so well or perhaps it was the salty tears that added that extra something, who knows?  It is true that I need to be in the right mood for cooking and being a food blogger it’s lucky that i’m more often than not in that mood but seeing that I have quite a changeable temperament on an hourly basis it is a wonder I get anything done… 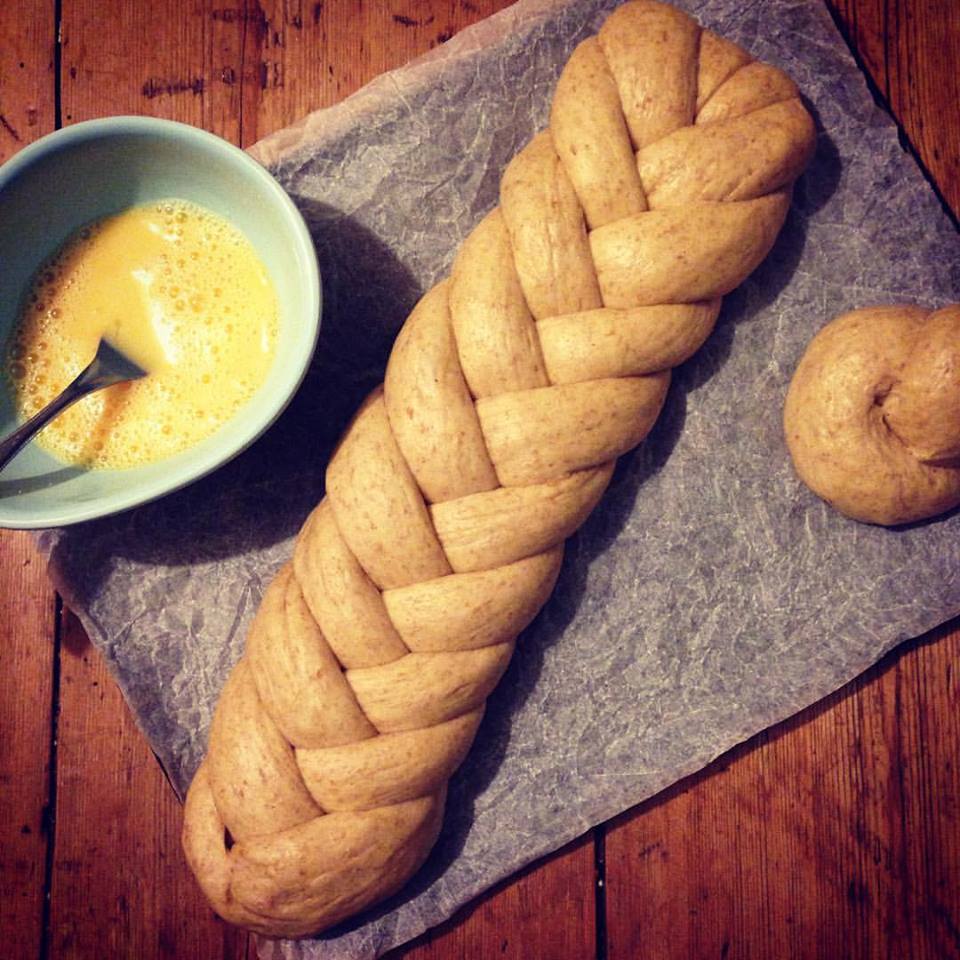 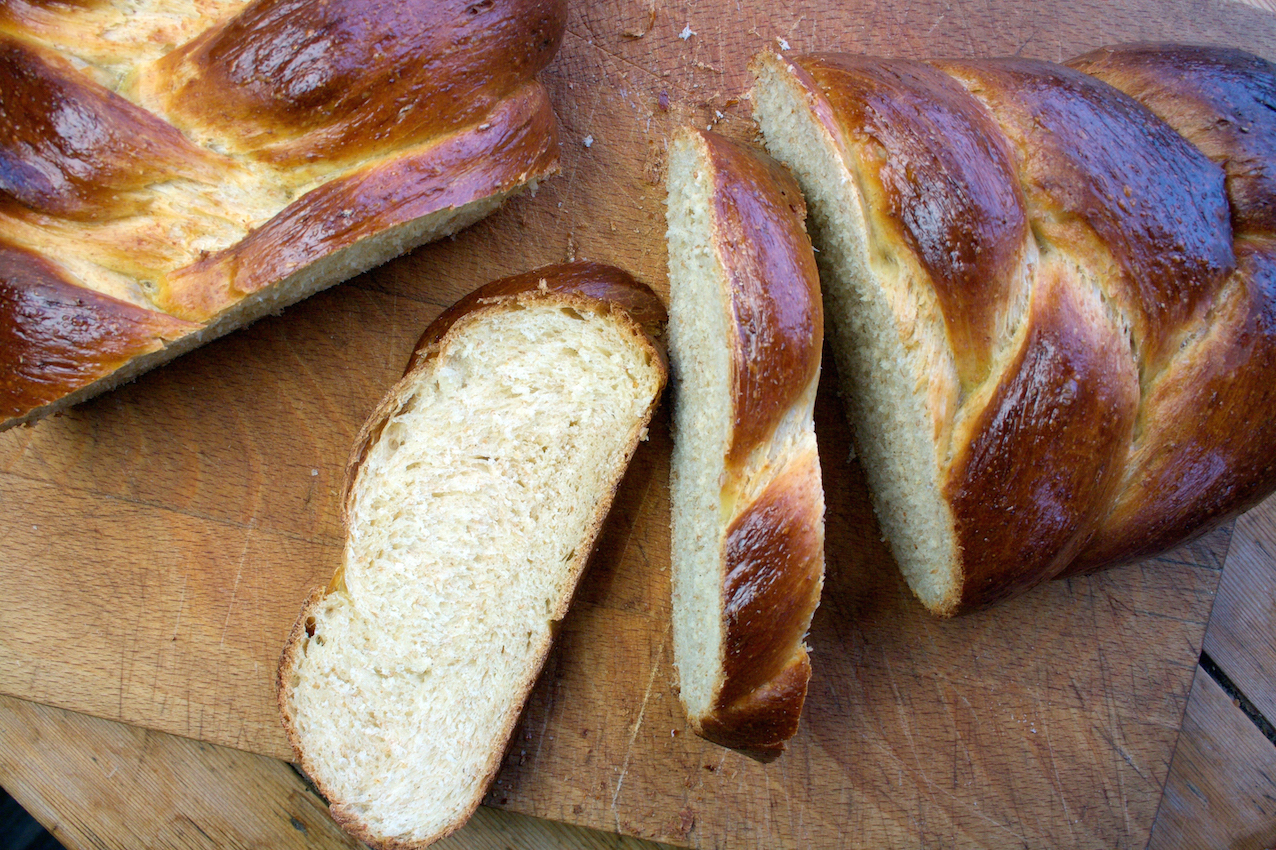 5 strand wholewheat challah bread
challah is a traditional jewish bread made for eating on the sabbath.  It’s a slightly sweet bread made with eggs that is very similar in taste and texture to brioche although it is eaten mainly as a savoury bread… tradition would dictate that 2 loaves were baked, one for eating on the Friday evening and the other for the Saturday as the sabbath doesn’t actually end until after sundown on the Saturday night and the law tells us that we’re not supposed to ‘work’ on the sabbath, which includes baking bread.  I guess the inclusion of honey and eggs into the bread guarantees a longer shelf life for the loaves.  The recipe below is easily enough for two loaves but if you want to impress with a bit of a centrepiece bread then go for one large 5 strand loaf, it’s surprisingly easy to do yet looks complicated enough to elicit a few wows from the crowd…

this recipe calls for the bread to rest in the fridge overnight.  I’m not entirely sure why and I haven’t made it without the fridge rest so I don’t know if it makes a difference but what it does mean

place the flour and salt in a large ceramic bowl and rub in the butter, then stir in the yeast and the salt

place the honey into the milk and warm it gently, then pour this and the beaten egg to the flour

using a rubber spatula, bring it together until a dough forms, then turn it our onto a lightly floured surface and knead for 10 minutes until soft. It will be very sticky at first but a little flour sprinkled on your work surface will help.  Oil the bowl.

place the kneaded dough back into the oiled bowl, cover with cling film and let it rise until doubled in size, which should be roughly an hour.

knead again for 5 minutes, then place it back in the bowl and let it rise again, till doubled

once risen, remove from the bowl and gently roll out into one long fat sausage and divide into 5 equal portions… I weighed each of my portions and they were roughly 250g each.

repeat until there’s no dough left and tuck the ends under until you have a neat loaf, then carefully tip and roll onto your baking tray

brush with beaten egg and refrigerate over night then in the morning, brush with egg again and bake on 190c for 15-20 minutes until golden and risen… if your loaf is anything like mine it will be very long and slightly too long for the oven, so watch it as it will burn where it touches the oven…

i’m linking this eggy bread to this months Simply Eggcellent which has the theme of Breads, Pastries and Eggy Puddings 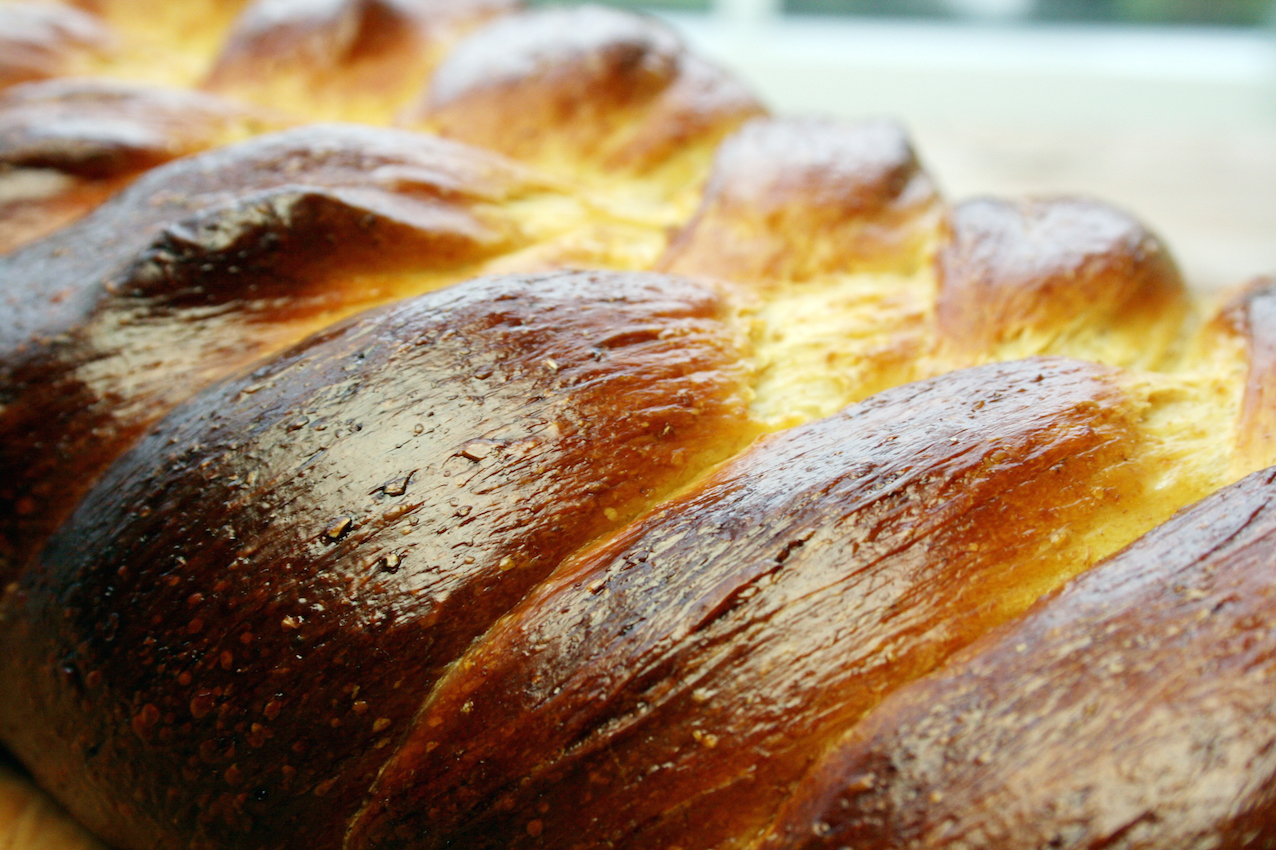