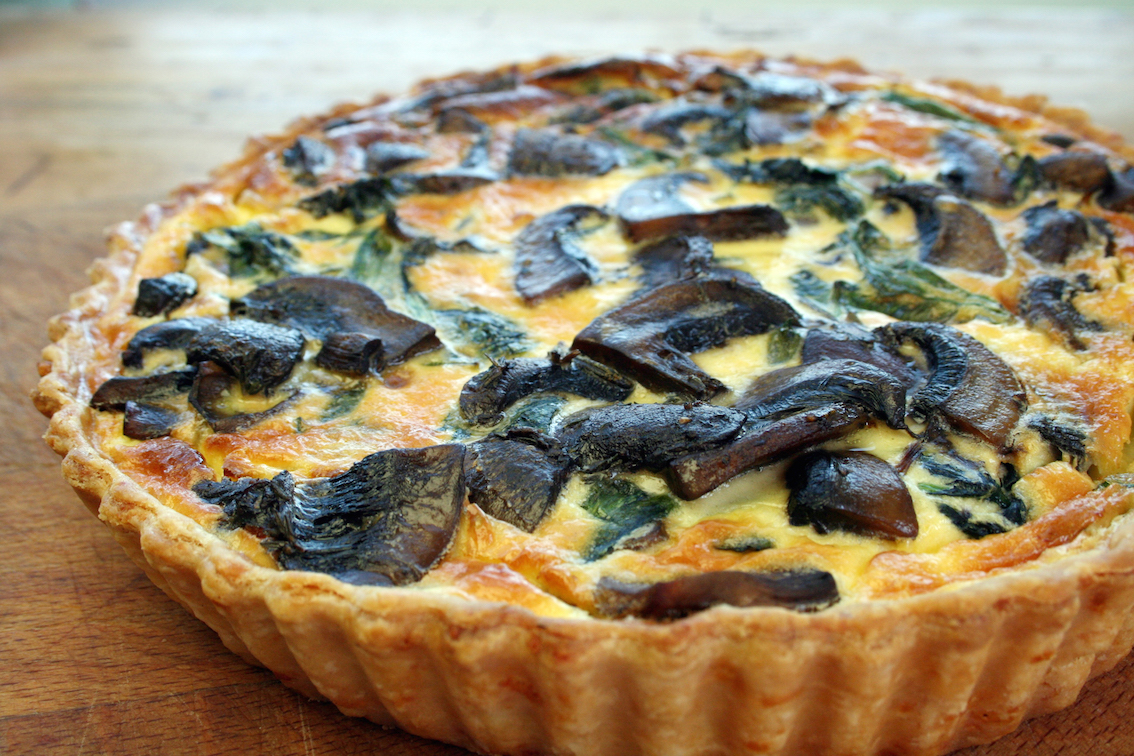 … our adorable dog Holly has been out of our lives for nearly 3 years now.  There isn’t a day goes by where we don’t think about her in some capacity.  In Belleau and the surrounding villages, nearly every household we know has a dog and even in London many of our friends has furry faces of some kind so you’re never far from a bit of dog attention should you need it… we were even on the underground on Thursday evening and a lady of not inconsiderable size squeezed herself onto a very crowded carriage with an equally enormous dog.  She sat down next to me and her dog lay outstretched at her (and everyone around us) feet.  The lady was slightly barmy, with what I like to think of as a befuddled London gleam in her eye as though getting on the tube at rush-hour with a huge dog is the most natural thing in the world and I love that all of us around her just carried on like it was normal too.  There was the odd strange look from a few passengers but frankly both woman and dog were of such alarming stature that you’d probably be just as barmy to have said anything anyway…

… both The Viking and I left the carriage at our stop and I know we were both thinking about Holly and how she loved to travel on the tube and stare her soft doe-eyes at others for the chance of a scratch under the chin or a belly-rub.  Of course it’s long weekends such as this when we’re at home for extended periods that I really miss the company of a dog.  It’s been a long three years but it’s undeniable that Holly’s passing has given us a freedom we’d never had before and our business has blossomed so it’s unlikely we’d get one any time soon but I have a feeling that we’re both getting broody again and that although it’s remained un-said it’s possible that there may be growing room in our hearts for a furry face once more… 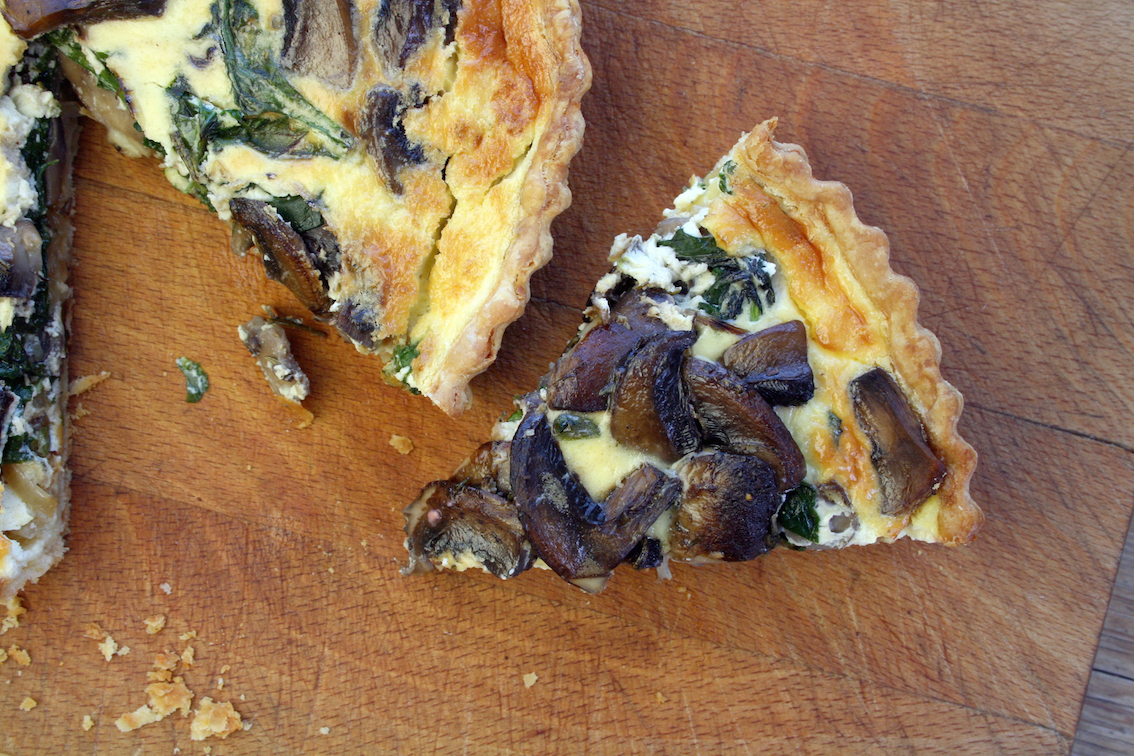 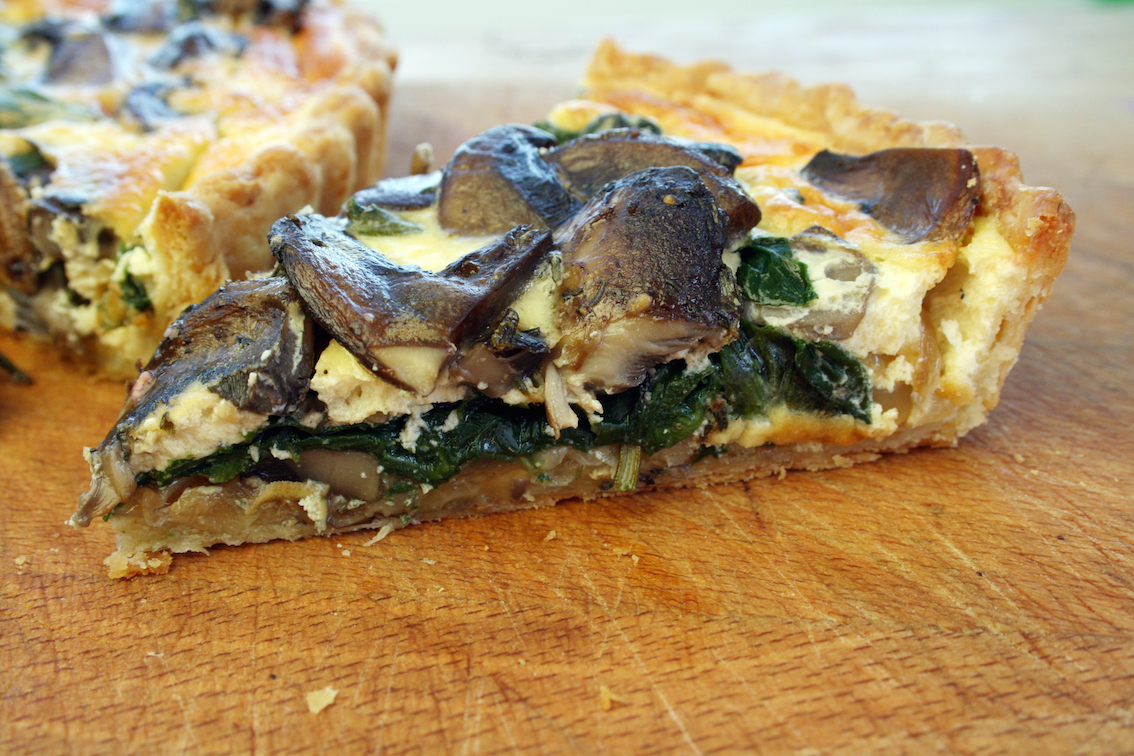 portobello mushroom and kale quiche with cheddar shortcrust
many people will be eating Spring lamb today for lunch and that’s all perfectly good and well, it is Easter Sunday after all and the lamb of God should be on everyone’s minds… everyone except vegetarians that is.  This is a robust quiche that feels fresh and ‘season-appropriate’ but also has the meaty bite of the portobello mushroom, it also has lashings of butter which quite frankly makes everything taste beautiful and a little more indulgence today probably shouldn’t kill us… i’ve made a version of this quiche countless times before here on the blog, it’s my mums recipe and her go to ‘family-gathering’ food.  Like the brownies I made on Friday, it’s a classic and it works so why mess with it – although the fillings and the pastry additions can be of your choice, I would try and stick to the liquid and egg mix as closely as possible although to be honest you can even swap out the sour cream for cottage cheese or creme fraiche if you’re watching calories…

start with the pastry by rubbing the butter into the flour in a large bowl until you have something resembling breadcrumbs, stir in the grated cheddar then add a tablespoon or two of cold water and bring together into a dough with your hands, you may need to add a little more water to create the dough but you will feel how ‘short’ the pastry is.  Flatten out the ball slightly, wrap in cling film and pop in the fridge for at least 30 minutes
in a large pan gently melt a generous amount of butter with a little olive oil and throw in the onions and and plenty of pepper and let them sweat for a little until they begin to soften, then add a little salt and a teaspoon of sugar, then turn up the heat a little and saute them for at least 30 mins so that they caramelise well.  Stir them regularly and after 15 mins add half the fresh rosemary and thyme – once they’re golden, take them out of the pan and set aside

add more butter and olive oil to the pan and add your mushrooms – without wanting to teach you to such eggs, here’s a little mushroom frying tutorial – first have the heat low, add your mushrooms to the pan and shimmy them around until they’re well coated in oil and butter, then leave them alone for as long as possible – on a low heat we’re talking 10 minutes.  They should now be soft, so shimmy them around, add the herbs, a little salt and more black pepper than you think you should and turn up the heat… you now want the mushrooms to go a little golden but not burn so i’d say a further 6 minutes till you have the desired colour – halfway through this, add the kale to the top of the mushrooms and let it soften as the mushrooms cook – turn the heat off and let the pan cool on the hob

now your pastry should be ready, roll it out and line your greased quiche pan. Scrunch up some baking parchment to make it pliable, then flatten it out and then lay this into the pastry case and pour some baking beans on top. Blind bake for 15 minutes on 150C

after 15 mins, remove the pastry and carefully lift out the beans – place the pastry back in the oven for another 5 mins to allow the base to turn golden

once your pastry is pale gold, take it out of the oven and set aside whilst you beat the eggs into the cream – season well.

place the caramelised onion into the bottom of the pastry case, then add the mushrooms and kale on top – I do this by hand to get an even arrangement and the mushrooms are usually cooler by this time, finally pour the cream egg mix all over and  bake on 160C for about 15-20 minutes until golden and risen, set aside on a wire rack to cool.  The quiche should easily slide out of the tin. 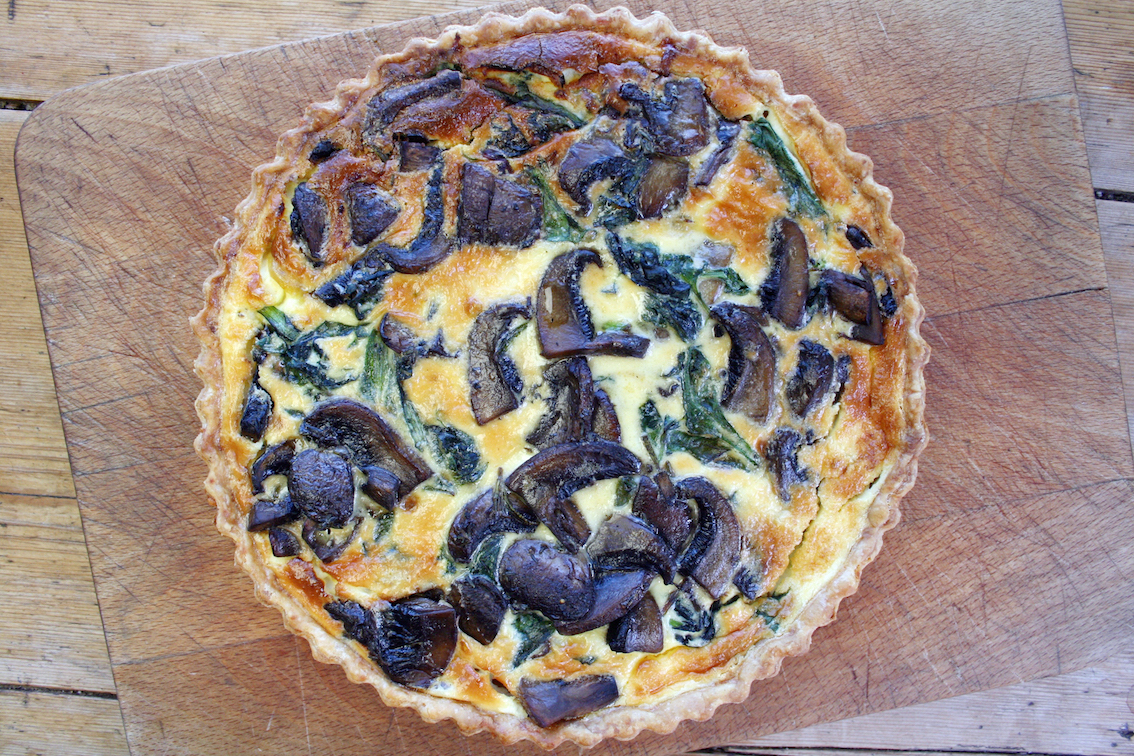 eat and of course, enjoy and Happy Easter!