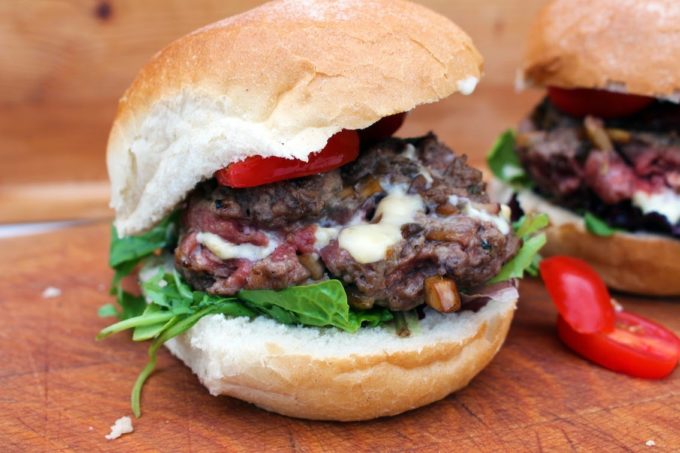 … yesterday I was invited to be a judge in a ‘Masterchef’ style cooking challenge at the Land Rover Burghley Horse Trials… now, I know very little about horses and I don’t really come from much of a horsey background but when you’re perceived as a local ‘celebrity’ (and I mean celebrity in the very loosest and flabbiest of terms,) you tend to get asked to attend pretty much everything that happens in your county.  Now, i’m by no means the only foodie in Lincolnshire but for some reason I seem to have developed a reputation for turning up to these things, doing my bit and probably enjoying myself way too much!  When I turned up yesterday I hadn’t realised quite how big a deal the Burghley Horse Trials are.  It turns out they are the biggest event of their kind in the world and everyone who’s everyone in the horse world attends.  I don’t really know anyone who’s anyone in the horse world so it all went a little bit above my head but of course I could tell by the reverential way people were behaving towards the sport that I was in a world where everyone takes it all very seriously.  To be fair, everyone I saw and met were lovely and it was a glorious sunshiny day at Burghley House… which was also a place i’d never really thought much about but this stately home is quite something to behold.  Built in 1587 it’s one of the UK’s most beautiful stately homes and it nestles in the Lincolnshire countryside in a dignified manner that neither I nor much of the rest of the county can quite believe.  If ever you find yourself in this part of the world I implore you to visit.

Anyway, the reason I was invited was to judge a little cooking competition between two riders, Adam Smales and Libby Seed, both of whom were very kind to give their precious time between events to come and play with us… I had developed a recipe using items that could be purchased from the Food Walk at the Horse Trials and gave them some very basic instructions of what to do… what I hadn’t realised at all was that the whole thing was being filmed by a professional film crew and the first moment I got an inkling of this was when I has a hand-written script pushed into my hand and told to speak into the camera.  Being the shy and retiring type I think I coped quite well (ahem) but you can see the results for yourself in the little film they made below.  I actually had a fabulous day and met some lovely people but I just wish someone had told me how tight my jacket looked!

In case you want to make it yourself, here’s the recipe. The burger is a divine, cheese on the inside burger but which also has the added delight of whisky infused onions and mushrooms.  One thing I was taught many years ago was that if you’re going to add other ingredients to the mince in a burger then you need to cook them first.  Raw onion in a burger is vile.  It’s way too strong a flavour and works as a garnish but never inside with the meat.  Cook it gently however and you have a glorious bedfellow to the soft meat that adds a deep heady note, particularly when paired with mushroom and whisky.  Cook the onions and mushroom soft and slow to really bring out their flavours and I promise you you’ll be in burger heaven before you know it!

heat a little oil and butter in a large frying pan, add the mushrooms and let them gently sweat and saute. Add seasoning, the whisky and a little pinch or two of freshly chopped rosemary, turn up the heat and let them sweat for another 6 minutes or so until the whisky has bubbled away and reduced – set aside to cool

place the mince into a bowl, season well and add a drizzle of olive oil and the mushrooms and bring together with your hands

take one ball and flatten it in the palm of your hand, then place a wedge or two of cheese on top and place a second meatball on top and form the patty, sealing the two halves together 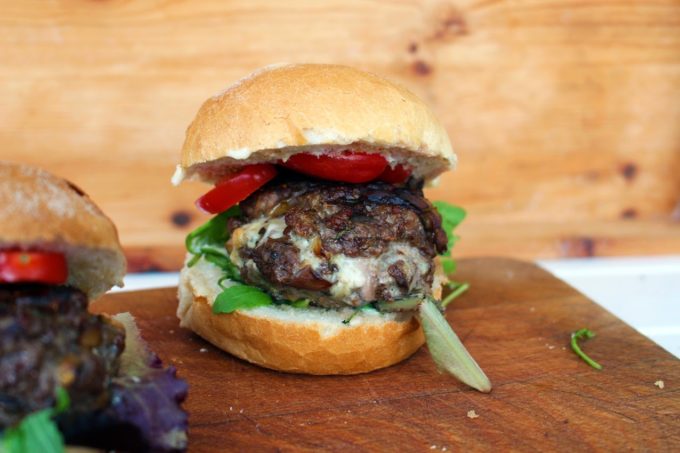