…so The Viking and I argue over the usual things; money, chores and where to eat but with most other things we tend to see eye to eye… until it comes to soup.  Let me clarify.  We both love soup, it’s just that The Viking loves his chunky, with all the vegetables floating around in a broth and, like this creamy mushroom soup, I love mine smooth.  All the vegetables blended together into a perfect, thick soup.  I guess it’s just what you’re used to.  I grew up with my mums soups.  She would always cook a soup as part of our Friday Night Dinner.  Never chicken soup – that she left to her mother, mums soups were usually vegetable based; spinach and courgette, chestnut and mushroom, curried parsnip… and all of them blended to a velvety smoothness.  The Viking on the other hand likes to explore the textures and flavours of each individual ingredient that goes into the soup.  I get it, I guess it’s more like a stew but I do think there’s a subtlety to a blended soup that can’t be beaten. 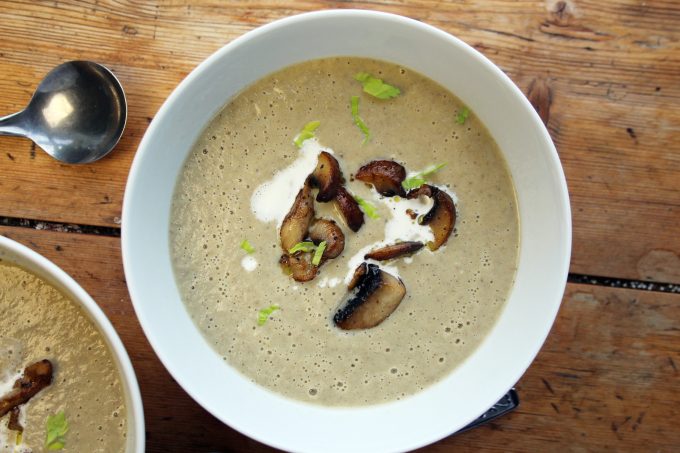 I love mushroom soup.  It’s so simple and so ridiculously inexpensive to make but like most soups, it’s not quite as cut and dried as placing mushrooms in stock.  I’ve seen a lot of strange mushroom soup recipes out there that are just mushrooms.  I tried that once and it essentially tasted like mushroom flavoured dish water.  I feel that you need some hidden depth of flavour in a mushroom soup, which is mince starts with a sofritto of onions, carrots and celery, as well as garlic.  It’s only small amounts but it makes a huge difference to the final pot when the whole thing is eventually blended together (ahem..)  I have conceded however to The Vikings love of lumps in his soup by frying off some mushrooms and adding them as a topping. One note on this.  I think soups and stews taste better when they’re not boiling hot. To be honest I think all food can’t be fully tasted when it’s piping hot but particularly with liquid foods I think they need to sit a while before serving.  What I tend to do is turn off the heat and leave the pan on the hob.  I have one of those electric convection hobs that takes a while to cool down and so I allow the soup to cool with the hob and when my little red light goes out then it’s ready to blend and serve.  It’s about 15 minutes and the soup is the perfect temperature.

warm your pot and melt some butter and oil, then add the onions, carrots and celery and saute until soft and full of flavour – this should take about 8 mins on a medium heat, then stir in the garlic and the herbs as well as some salt and pepper and saute for a further 4 minutes

add the stock and let it bubble away gently for 15 mins, then take it off the heat, let it cool for 10 mins before you stir in the cream and blend until smooth

saute some thickly sliced mushrooms with plenty of butter and pepper to use as a topping. 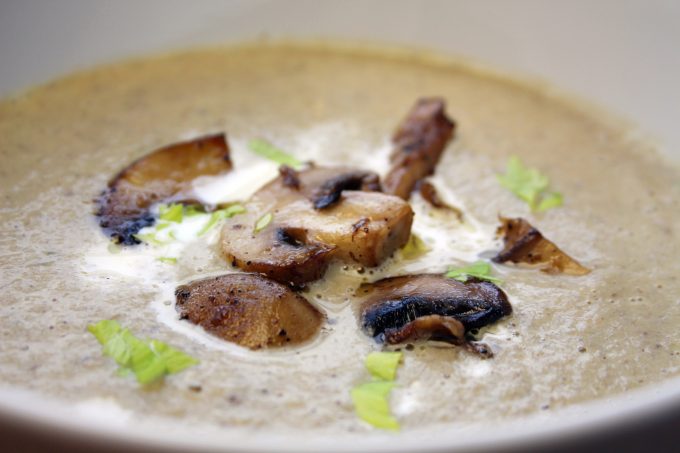