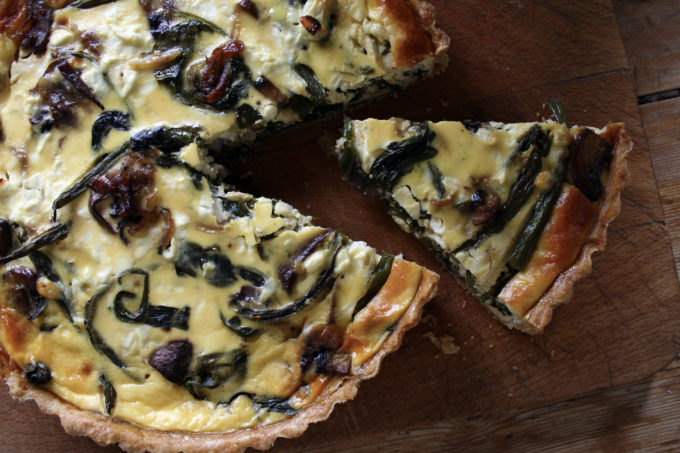 I’ve had a few requests for some ‘classics’ and I feel this spinach, mushroom and green bean quiche falls nicely into the classics mould.  Normally I’d be writing about how a quiche reminds me of Spring – the first meals outside on the lawn, Sunday afternoon with friends and family, sunnier and happier times.  But the world is in utter turmoil right now.  Some days it feels like we’re in a scene from an apocalyptic Hollywood movie and other days I’m staring at the news in wide-eyed terror.  Everything and everyone’s lives have been effected.  The knock-on effect throughout society is wide and deep and who know how and when it will end?

This recipe is for a large fluted flan dish (roughly 30cm.) This time, iv’e actually used one 20cm fluted round flan dish and  an oblong one I found in the back of the fridge.  Both the pastry and the filling can be frozen so don’t worry if it seems like there’s too much, you can always freeze it and use it later. 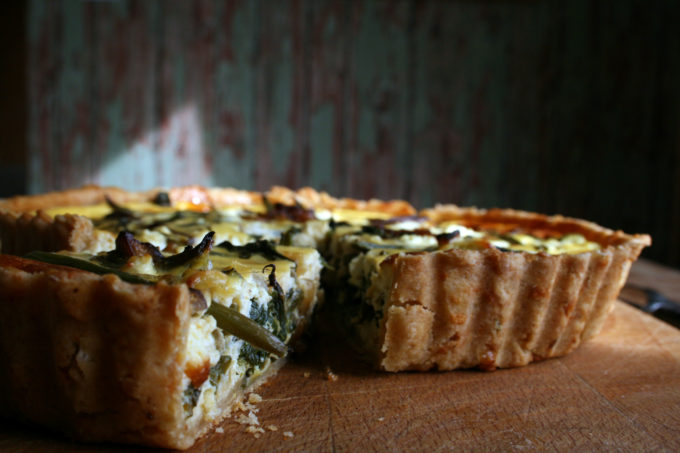 for the pastry
250g plain flour
100g butter
50g finely grated strong cheddar cheese
1 teaspoon free herbs – I’ve used some chopped thyme
water to mix
for the filling
1 medium onion – halved and then sliced, so you have nice, thin, half-moon layers of slices
150g mushrooms – I used chestnut mushrooms – thickly sliced
1 large bag of spinach (can be fresh or frozen)
handful of green beans
butter and olive oil
salt and pepper
4 eggs – beaten
150ml single cream
100ml cottage cheese
i’m using a 25cm, 3cm deep fluted tin with a loose bottom which i’ve greased well
start with the pastry by rubbing the butter into the flour in a large bowl until you have something resembling breadcrumbs, stir in the grated cheddar and herbs, then add a tablespoon or two of cold water and bring together into a dough with your hands, you may need to add a little more water to create the dough but you will feel how ‘short’ the pastry is.  Wrap in cling film and pop in the fridge for at least 30 minutes
in a large pan gently melt a generous amount of butter with a little olive oil and throw in the onions and mushrooms and plenty of pepper and let them sweat for a little until they begin to soften, then add a little salt, then turn up the heat a little and saute them further, then add the green beans, place the lid on, turn down the heat and let them soften for 5 mins, then add the spinach, turn off the heat and steam for another eight minutes until beginning to cool down and the spinach has fully wilted and can be stirred in.
now your pastry should be ready, roll it out and line your greased quiche pan. Scrunch up some baking parchment and then lay this into the pastry case and pour some baking beans on top. Blind bake for 15 minutes on 150C, then remove from the oven and set aside.
once your pastry is turning golden, take it out of the oven and set aside whilst you beat the eggs into the cream and cottage cheese
spoon the spinach and mushroom mix into the pastry case followed by the creamy egg mix and  bake on 160C for about 15-20 minutes until golden and risen, set aside on a wire rack to cool.  The quiche should easily slide out of the tin.
eat and of course, enjoy!

Cauliflower Coconut Curry This curry is the most