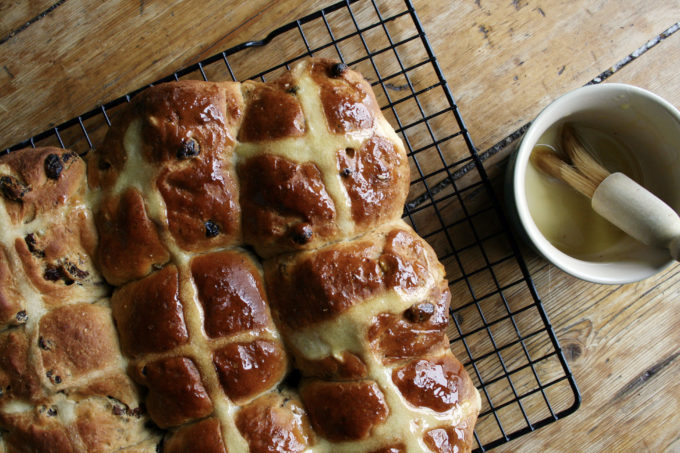 It’s Easter so it’s hot cross buns time.  I’m a big fan of an enriched bun and anything with fruit and spices is always a big hit here in Belleau Kitchen.  The Viking will eat his toasted with butter and jam but I will have mine with a very strong cheddar.  I adore than sweet and savoury mix and really don’t get to eat it very often so this is the perfect excuse.

I’m sticking with the traditional this year although I have in the past gone ‘off piste’ with banana hot cross buns and chocolate hot cross buns. Although I am twisting things slightly by using a little wholemeal bread flour because we’re still finding it hard to get white bread flour I want to ration what I’ve got by mixing it up a little with other flours.  They’re actually rather lovely and it’s such a small ratio change that it’s hardly made much difference. 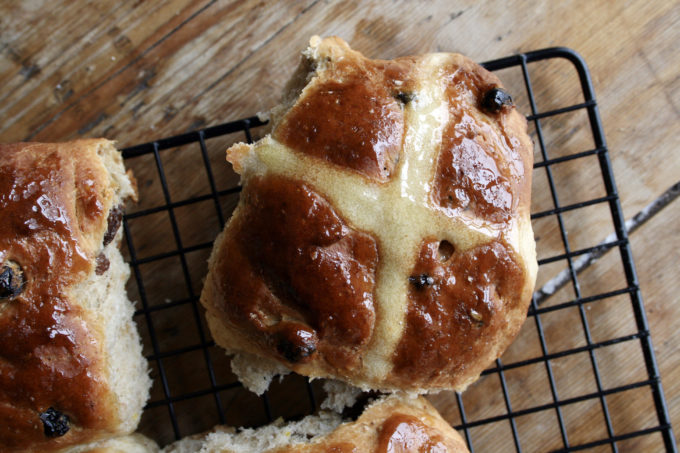 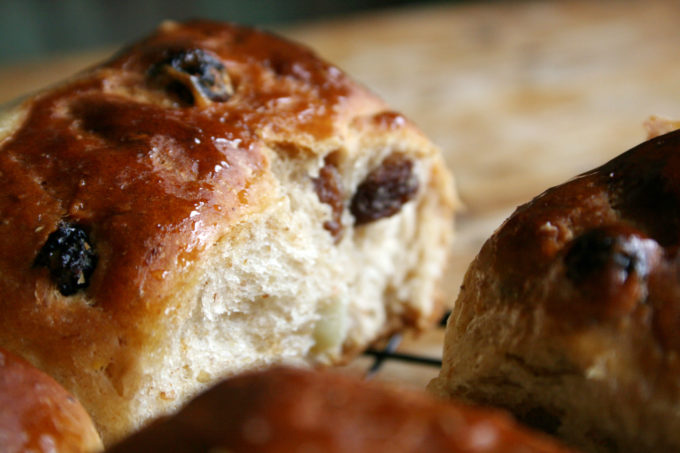 for the cross and glazing

Warm the milk in a pan, then remove from the heat and add the butter so it melts. Set aside to cool slightly – you don’t want hot milk killing the yeast. It should be just warm.

Put the flour, sugar, spices and lemon zest into a large bowl and mix together. Then add the salt and yeast.

Add the buttery milk to the dry ingredients, followed by the eggs and bring it all together incorporating the flour from the edges of the bowl as you go. The dough will be very wet, which is right for an enriched dough.  It probably won’t come together into a tight ball of dough like a regular loaf.  Mine was more of a doughy mass.

Once all the ingredients are well combined, add the mixed fruit and then knead for 10 minutes, I use my stand mixer with a dough hook but it can be done by hand on a floured surface.

Oil a bowl and place the dough in a bowl, cover with cling film and leave to rest in a warm place for about 1½ hours or until doubled in size.

Knock back the dough and then turn it out on to a floured surface and divide into 12 balls. Line a large baking trays with paper and place the balls on the tray, placing them fairly close together and flattening them slightly. Cover the tray with oiled clingfilm and set aside for the second rise for at least 60 minutes.

For the cross topping, add the flour to a bowl with 100ml/3½fl oz water. Mix together to make a paste and spoon into the icing bag. (I don’t bother with an icing bag, I just use a spoon.)

When the buns have risen remove the clingfilm and pipe a cross on each bun. Bake for 15-20 minutes until pale golden-brown, turning the baking trays round halfway through if necessary.

Melt the golden syrup, honey or marmalade in a pan and while the buns are still warm, brush the buns with a little syrup to give a nice shine, before setting aside to cool on a wire rack. 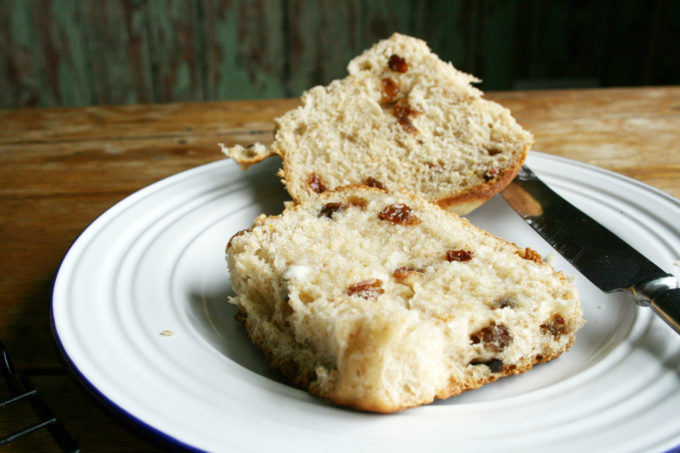