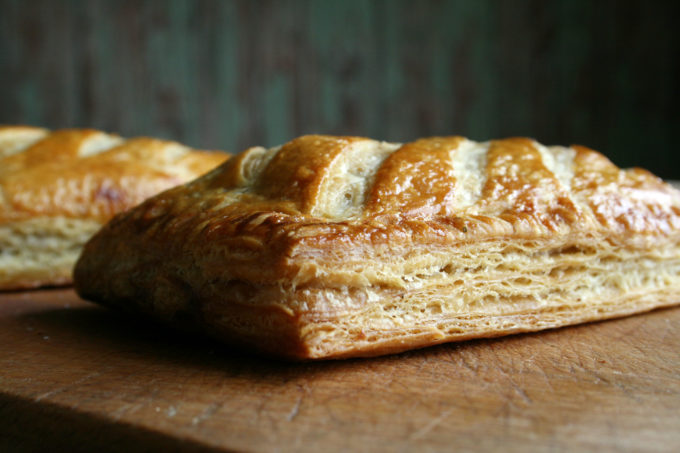 These are not Greggs sausage rolls because the worst thing may be happening – the ‘best restaurant in the world’* Greggs is struggling during the coronavirus pandemic. Not that I want to make light of a terrible situation but this is BAD! Just as the world is given the gift of Greggs Vegan Sausage Rolls we may have to say goodbye to them! For those of you living under a bush (or in some kind of weird country where you simply don’t care about meat stuffed into pastry) you’ll know that the Greggs Sausage Roll is ubiquitous on the British high-street.  The inexpensive (and mightily delicious) savoury snack of the every-day-person.  A few years back they created a vegan version of said sausage roll and to say it hit the headlines is an understatement. I am a big fan, in fact I’d be even bigger if I didn’t have any self control as our drives up and down between London and Lincolnshire passes about 5 bakeries along the A1. For something that contains no butter and no meat they not only get an incredibly flaky pastry but it also tastes so good.  A case of ‘you really don’t miss the meat.’

So I thought I’d have a go at creating my own version.  Admittedly these are vegetarian and not vegan.  The thought of trying puff pastry without butter makes me shiver with worry.  Clearly it’s possible but I’m not keen. Or Bothered.  You’ll also see that they’ve come out looking more like ‘parcels’ rather than rolls even though they went in with what I thought was quite an authentic ‘Greggs’ style to them.

I’ve used my now ‘go to’ filling mix which includes a stuffing mix as well as mashed veggie sausages.   It’s quite ‘Christmassy’ but it’s so damn tasty I think it works all year round. 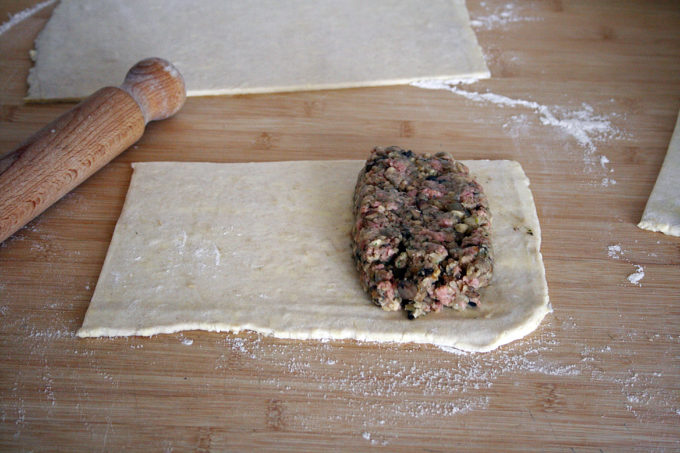 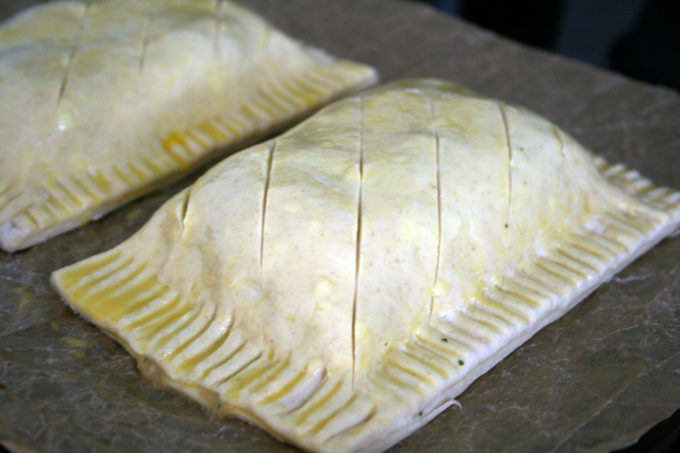 Let’s make the pastry first…Place the flour into a large bowl and using your fingertips, quickly rub in the 60g of butter, then add the water / lemon juice mix a tablespoon at a time.  You can stir this with a wooden spoon but I like to use my hand shaped like a claw as I can feel the flour and water begin to form the dough so I know how much liquid to add.  You want to add enough liquid to form a firm dough that isn’t too tacky.

Knead the dough fora couple of minutes then wrap in clingfilm and pop in the fridge for about 10 mins.

Flour your work surface and roll the dough out into a long rectangle with the short side nearest you, then sprinkle the bottom 2/3rds of the rectangle with half the grated frozen butter. (Push it down into the dough slightly.)  Fold over the top un-buttered third towards you and then fold the bottom third back over the top so that you have created 6 layers of dough/butter/dough/butter/dough/butter.

Turn the dough 90 degrees and roll it out again into a rectangle and repeat the above with the remaining butter.  Roll it our again after this and fold, then wrap and refrigerate for a good hour.

Repeat the roll and fold process again three more times but don’t worry about refrigerating the dough between each fold.  if you work fast you really won’t need to.

After the 5th roll and fold, wrap it and pop it into the fridge for at least an hour before using. (You can freeze at this stage.)

Next, rehydrate your stuffing mix according to the packet instructions.  Do this in a large bowl and add a little olive oil.

Mix the stuffing mix, mushroom mix and some grated cheese together and set aside to cool whist you roll out your pastry.

We want them to be like Greggs sausage rolls so one large slab rather than the mini ‘party’ sausage rolls I usually make at Christmas. Roll out the pastry and cut it into two oblongs, roughly 36cm x 15cm and lay a generous rectangle of sausage mix on one side of each square.

wet the edges of the pastry with a little water or egg wash before folding them over and scoring the edges with a fork to seal them together.  A couple of diagonal slices across the top will give them a traditional sausage roll look.  Brush each one with beaten egg and place them on a baking tray 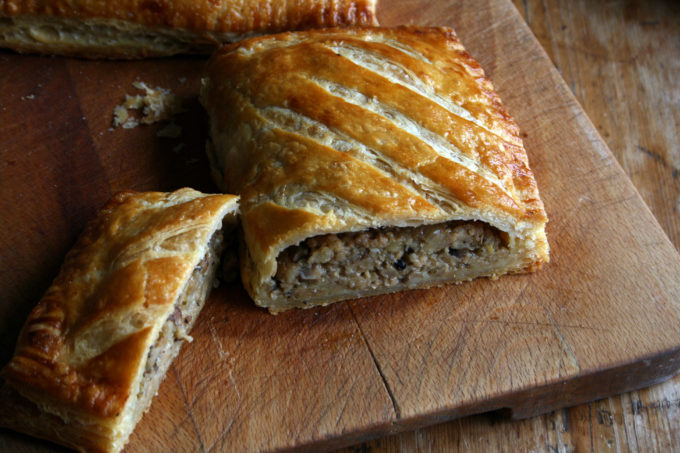 *not my quote, some bloke I used to know, he was probably a northerner…