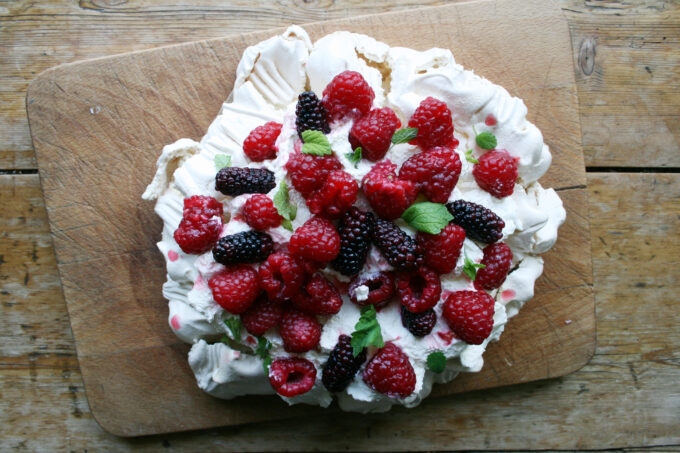 It’s been such a long time since I made one that I though this blackberry and raspberry pavlova was well overdue.  I’m a big fan of meringue and have been ever since I was a kid. Growing up in the 70’s and 80’s, pavlova was a basic dinner party staple in our suburban house in London.  Mum’s was particularly wonderful and she still whips one up for special occasions if we can persuader her. It’s totally indulgent but just a slither goes a long way, although I know I’m kidding no-one suggesting I would ever eat just a slither.  The other great thing about a pavlova is that whilst it may take up quite a bit of room in the fridge, once you’ve eaten a slice or two you can then break it up into Eton Mess and squish it into an airtight container.

I’m using a sort of combined traditional and Italian method for this recipe.  The sugar is heated in the oven to the point where it just starts to caramelise.  This helps the egg whites become more glossy and keep perfect peaks.  I don’t use any vinegar or cornflour as I’ve tried both methods and I really like the way this comes out.  With my recipe you get a brittle surface to the meringue but a soft, marshmallow centre.

For the filling I’m using the traditional double cream but I’m adding some Greek yoghurt.  I think that the whipped cream can be quite cloying, particularly in the summer and so the addition of the greek yoghurt adds a slightly sour note which is refreshing.  The elderflower cordial lifts the whole thing to fancy standards, you won’t regret the purchase. 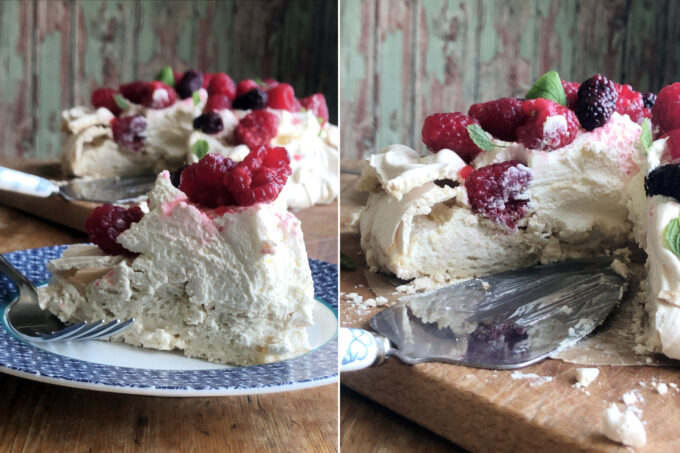 I’m using golden caster sugar as it gives a more caramelised flavour and the final pavlova will be a light brown colour.  if you want a perfect white meringue then use normal sugar.

Pre-heat the oven to 200C (fan) and prep two baking trays with a piece of baking parchment or greased proof paper.

Spread the sugar out onto one of the baking trays and pop it in the oven for 4-5 mins until it starts to just caramelise around the edge.  You don’t want it to actually melt or burn, so watch it like a hawk. Then take it out of the oven and turn the oven down to 120C (leave the oven door open whilst you whisk the eggs as this will help reduce the heat.)

Whisk the egg whites until it just starts to get frothy – roughly 3 mins on high and then very carefully pour the warm sugar into the eggs whites as they whisk.  I fold the parchment paper into a sort of funnel shape and slowly pour it in.  Continue to whisk on a medium speed for at least 6 minutes whilst the eggs whites stiffen and turn glossy. You’ll know they’re done when you stop the whisking and pull the whisk away.  It should leave a stiff, glossy peak.

Spoon 1/3rd of the mixture onto your baking tray and spread it round in a circular motion to form a round shape.  Dollop large spoonfuls of mixture around the circle using the remaining mixture.  Don’t worry if it all looks rather rustic.  I love it like this.  You can of course use a piping bag but quite frankly who has the patience for this?

Use a knife to swirl the tips of the meringue blobs.  Then place it into the oven for an hour.  After an hour, turn the oven off but leave the meringue inside until completely cool.  it can even stay overnight.

When you’re ready to serve, place the fruit into a bowl and spoon the elderflower cordial over the fruit and set aside whilst you whisk the cream to a soft whip (roughly 1 minute) and then spoon it into the well in the pavlova.

Arrange the fruit over the top and then stuff it in your face!